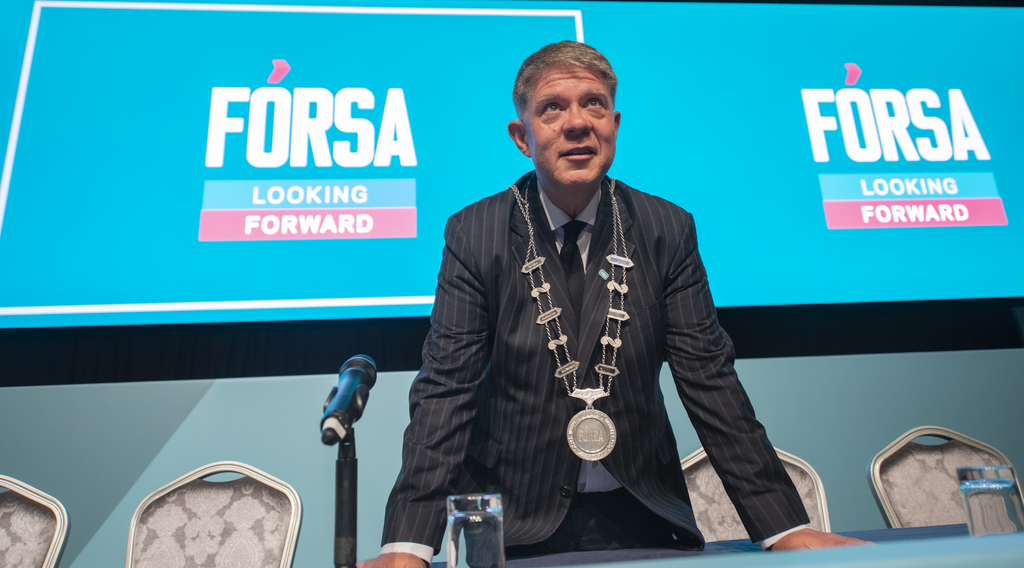 The president of Ireland’s largest public service trade union has criticised the Government’s approach to legislating for remote or blended work arrangements.

Addressing up to 700 delegates at the opening of Fórsa’s national conference in Killarney this evening (Wednesday), Michael Smyth said legislation drafted in January effectively gave employers a ‘right to refuse’ remote work, rather than giving workers a right to request it.

Mr Smyth said the long list of ‘reasons to refuse’ in the draft law revealed a Government “prepared to pander to every employer sensitivity and stereotype, no matter how baseless, falling back on old and outmoded ways of thinking about the relationship between employers and workers.”

He said the Government had failed to lead on the issue despite its publication of the Making Remote Work strategy in early 2021, which includes a commitment that 20% of public service jobs will be worked remotely.

In drafting its legislation, the Government fell back on old and outmoded ways of thinking about the relationship between employers and workers.

Mr Smyth said Fórsa considers this target “to be a floor rather than a ceiling,” and indicative of where policy can genuinely improve the lives of workers, continue to improve on service delivery, meet climate goals and ensure a more equitable and sustainable rate of development in regions and rural towns.

Mr Smyth said that, in attempting to legislate for remote work, the Government had “simply looked to return to old and outmoded ways of thinking,” instead of “looking forward and harvesting the benefits we now know remote working can deliver.” He described the Government’s efforts as “a spectacular own goal after two years of a revolutionary real-world experience.”

He told delegates that the pandemic had been a powerfully disruptive force in everyone’s lives, and workers found themselves thrust into an “enormous and unplanned experiment in different ways of working,” which he said was a “seismic revolution in the world of work”, changing fundamental assumptions about the workplace, productivity and service delivery.

Quoting Sarah O’Connor’s letter featured in the Financial Times in August 2021, Smyth said the pandemic provided a once-in-a-generation opportunity to “rebalance the economy by allowing good jobs to spill out of pressure-cooker cities, and taught us that many office jobs can be done remotely, at least part of the time. Policymakers should lean into this trend, and make a new world of work possible. Let’s not go back to a past which wasn’t working anyway.

We continue to push for forward thinking on this issue, and there’s no reason that the State can’t be the driver of best practice.

“I think this is the challenge and the mission we must set ourselves at this time, to provide leadership in a world of work that has utterly changed,” he said.

The union’s national executive will table a motion to the conference this week which says the normalisation of remote and blended working will deliver benefits for workers, employers and service users, while making a significant contribution to climate action, spatial policy, as well as urban and rural development.

Mr Smyth commented on developments with the legislation as it undergoes scrutiny by the Oireachtas Enterprise Committee, following reports this week that the Department of Enterprise is examining how best to strengthen the right of appeal in the draft legislation, and that employers could have fewer grounds to refuse requests for remote working under changes being considered.

He added: “That’s why this union continues to work through ICTU for legislative amendments to ensure a genuine right to request remote work arrangements, as well as an obligation on employers to demonstrate objective reasons for refusing remote work, a fair and robust appeals mechanism, and strong worker protections that provide for health and safety, workers’ privacy and the right to disconnect.

“We continue to push for forward thinking on this issue, and there’s no reason that the State can’t be the driver of best practice,” he said.

Commenting on the recent successful negotiation of a blended working policy framework in the Civil Service, which the union hopes will be a template for the broader public service and other sectors, Mr Smyth added: “Getting it right means, for example, that the State can more successfully deliver on its aims to respond to the very real and immediate climate emergency.

“Why would we mindlessly return to clogging the roads between commuter towns and Irish cities with thousands upon thousands of private cars, needlessly burning hundreds of thousands of litres of fossil fuel and releasing thousands of tonnes of carbon into the atmosphere – just so that someone can perform work that they could – just as easily – have done at home or in a remote working hub close to home?”

He said daily commuting in and out of cities is an “outmoded” pattern of work inherited from the last century: “Technology and innovation liberated us from these obligations, so why drift back to them so mindlessly? The State can demonstrate a sense of vision that other employers can follow, and thereby reap the best of the remote and blended work experience.”

He said the Europe-wide shift from a 10-hour working day to an eight-hour working day in 1919 was implemented to ensure there was work available for those returning from the horrors of the battlefields of France and Belgium, and became the recognised, standard working day across the 20th century.

“If we consider the intervention of the Covid pandemic in similar terms, and how remote working briefly eliminated daily commuting and the workplace culture of presenteeism, we might recognise how the very real innovation of effective remote and blended working policies can inform the 21st century.

The very real innovation of effective remote and blended working policies can inform the 21st century, just as the eight-hour day shaped the 20th century.

“In this context, let’s not lose sight of the radical and innovative potential for the four-day working week, which Fórsa has proudly led the way to what is now a global campaign, and whose pilot-scheme is an active experiment in the future of work. It has the potential to deliver a dividend for workers as automation and artificial intelligence continue to drive another industrial revolution.

“Equally, we must ensure that the policies we’re calling for work for everybody. That means, for example, policies to ensure inclusion of remote workers in collective workplace activities, including business meetings and training and fair access to career advancement for all workers, regardless of their work location.

“It also means making adequate provision for new and younger workers to have a meaningful experience of the corporate knowledge and culture of their workplace, and guard against isolating them from the necessary mentoring and guidance so crucial to the early years of their career,” he said.

Fórsa’s biennial delegate conference, its first fully in-person conference since 2018, continues until Friday 20th May at the INEC in Killarney.

The absence of agreement between unions, Government and employer representatives on practical measures to expand the range of free and
Read More