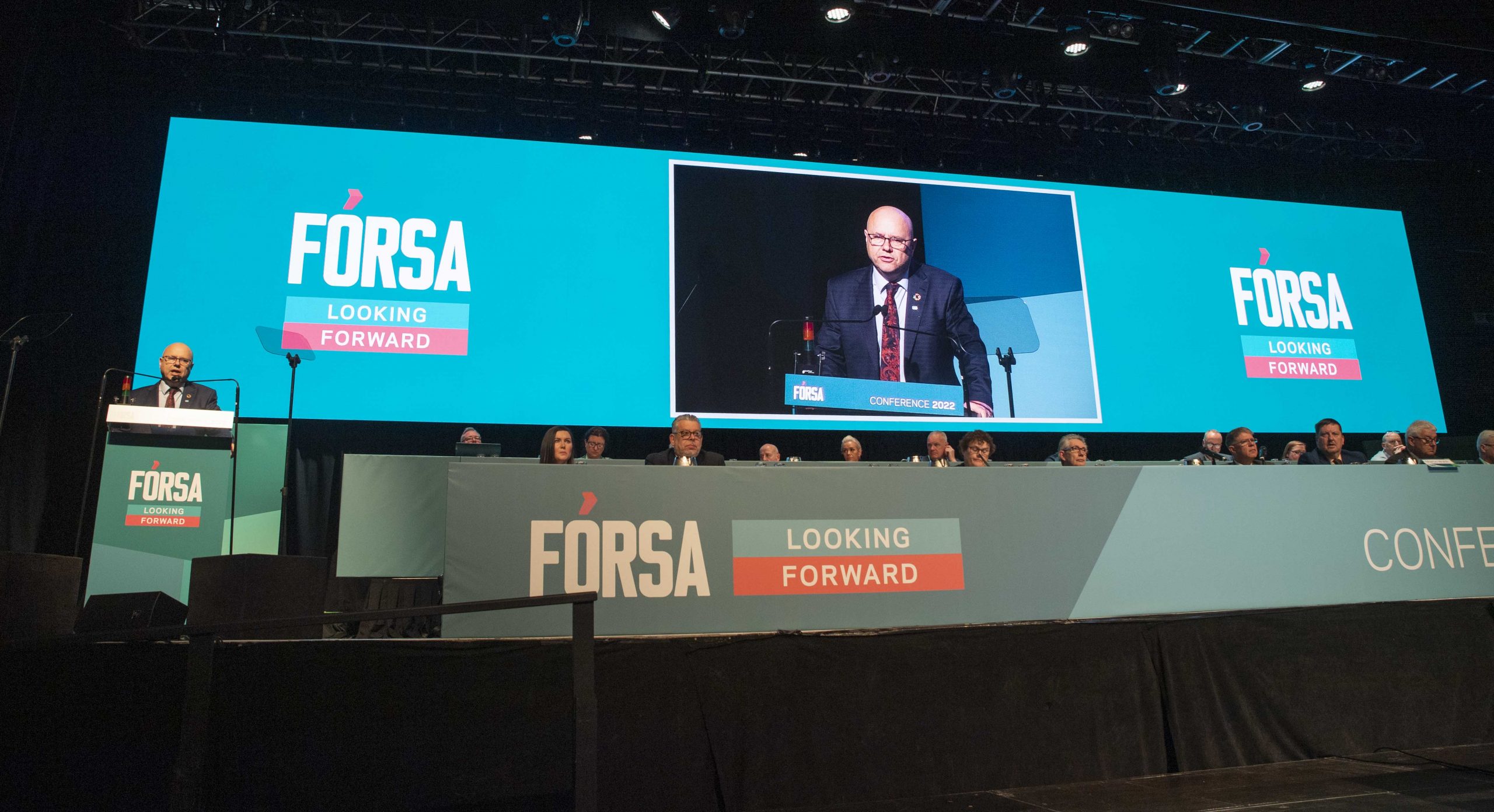 The absence of agreement between unions, Government and employer representatives on practical measures to expand the range of free and affordable public services is undermining the national response to Ireland’s cost of living crisis, according to Fórsa.

Speaking at the 80,000-strong union’s national conference in Killarney today (Thursday), Fórsa general secretary Kevin Callinan said Ireland should resist a return to the “poor quality” social dialogue in place prior to the pandemic, during which more intense engagements shaped and delivered workplace safety protocols and emergency income supports.

He called for intensified dialogue to improve Ireland’s ‘social wage,’ or state spending on welfare supports and public services. He also called for the national minimum wage to be increased to the rate of the higher living wage.

The lack of an adequate social wage was placing all the emphasis on pay as a means of protecting living standards.

“We are at a crossroads. The cost-of-living crisis demands more than a talking shop if living standards are to be protected. With the World Bank predicting that energy and commodity prices will remain ‘historically high’ until 2024, the value of Irish social dialogue will be measured by outcomes, not the number of meetings scheduled.

“Workers in countries across the continent are paying more for heating, fuel and food. But in Germany, Denmark, Sweden and most other rich EU nations, workers don’t have to fret about the cost of childcare, an unavoidable visit to the GP or A&E, eldercare fees, or even the rent – because these things are free or affordable through a public service-delivered social wage,” he said.

Kevin said the lack of an adequate social wage was placing all the emphasis on pay as a means of protecting living standards.

Moving a motion from the union’s National Executive, which placed the “restoration and improvement of living standards above all other issues in the current round of pay bargaining in the public service and elsewhere,” Mr Callinan said Fórsa would pursue this with a “single-minded determination.”

He said he didn’t underestimate the scale of the challenge in the run-up to imminent public service pay talks. But he added that there was now a solid basis for substantial negotiations as the employers’ side had acknowledged that the inflation assumptions underpinning Building Momentum have changed significantly.

“Workers, their families, and their communities are the victims of inflation, not the cause of inflation. I have made it clear that there needs to be an improvement in the agreement’s pay terms this year,” he said.

In a formal meeting last Wednesday (11th May), Department of Public Expenditure and Reform (DPER) negotiators also accepted that a change to the current agreement’s pay terms would be discussed in substantive talks, and also wanted to achieve some certainty about next year’s public service pay bill before October’s Budget.

Kevin acknowledged that the current Government had established a Social Dialogue Unit in the Department of the Taoiseach, and that the Labour Employer Economic Forum – the country’s primary forum for high-level social dialogue – had been elevated with the Taoiseach himself chairing each of the quarterly plenary meetings.

There is now a chance to commence the process of transformational change.

“I have long been calling for quick and meaningful action on the social wage, which measures how much better off you are because of Government spending on welfare supports and public services. In Ireland it is very low by comparison to other modern European countries.

“Part of the reason is the relatively low rate of employer PRSI. But it’s also because of long-term failure to properly resource public services. Sometimes ideology gets in the way, like marketized childcare, privatised care of older people or two-tier healthcare.

“These things won’t be rectified overnight. But there is now a chance to commence the process of transformational change. But we need to start the job with urgency and rigour, and achieve early and tangible results, because Ireland’s low social wage is feeding directly into today’s cost of living crisis.

“Let’s be very clear – if this opportunity is spurned or squandered then the blame for declining living standards will rest squarely on the shoulders of this Government,” he said.

Kevin also called for stronger collective bargaining rights to improve wages and productivity and underpin better outcomes for society and the economy.

“Ireland is out of step with European levels of collective bargaining coverage and he last 40 years have seen a huge shift in the balance between capital and labour. Globalisation has ensured that the proportion of wealth going to an elite has reached obscene levels – often of a magnitude beyond normal comprehension. The only way that this will be arrested and reversed is if we build workers’ power,” he said.

Fórsa is Ireland’s largest public service union with over 80,000 members in health, education, local government, the civil service and other State agencies. The union also has members in the community organisations and private sector companies in aviation, communication and elsewhere. Up to 700 delegates are attending its national conference in Killarney, County Kerry, its first fully in-person conference since 2018, continues until Friday 20th May at the INEC in Killarney.

Fórsa calls for menstrual health policy in all workplaces

Just 1% of employees have the protection of a menstrual health policy in their workplace, according to a survey published
Read More