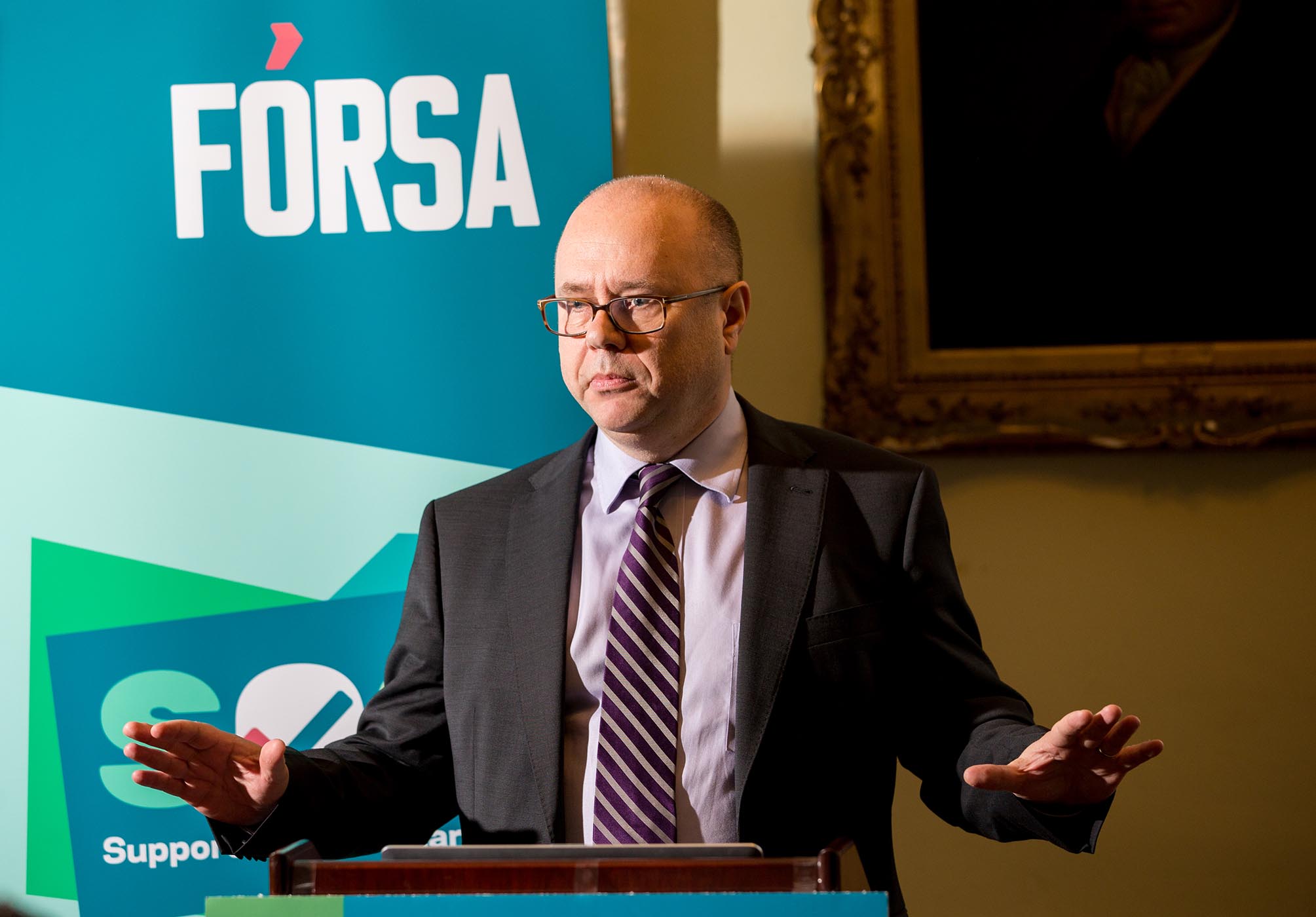 Fórsa has disputed Government estimates that restoring pre-crisis working time in the civil and public service could cost the Exchequer over €600 million a year.

Speaking at the union’s civil service conference in Kilkenny this evening, Fórsa’s Senior General Secretary Designate Kevin Callinan said the €600 million figure was at least 50% higher than the Government estimate when the additional time was introduced in 2013. And he said advances in new technologies and work organisation could defray much of the cost of reduced working time in the public service and elsewhere.

Earlier this week, Mr Callinan said discussion of the restoration of pre-crisis working hours should form part of mid-term review of the Public Service Stability Agreement (PSSA), which governs pay and working conditions for most public servants. He said a review was necessary to “bolster the agreement’s credibility by taking account of improved economic indicators and past income foregone.”

Speaking to almost 400 delegates at the opening of Fórsa’s civil service event, Callinan noted that 12 branches had submitted motions on the issue of increased working time – more than on any other issue under consideration.

Speaking to almost 400 delegates at the opening of Fórsa’s civil service event, Callinan noted that 12 branches had submitted motions [motions 119-130] on the issue of increased working time – more than on any other issue under consideration. Similar motions will also be discussed at the union’s local government conference, which also takes place in Kilkenny this week.

The motions relate to an additional 2.25 hours added to the working week of lower and middle-earning civil servants under the 2013 Haddington Road agreement. Callinan says this had resulted in a “two-tier problem” because the temporary pay cuts experienced at the same time by higher grades – whose working time did not increase – have been restored, while additional working time for lower and middle earners has not.

“A few years ago, when we were in the eye of the economic storm, I opposed similar conference motions. But I’d struggle to construct a convincing argument against them now, in light of our current economic performance and rapidly-developing technological possibilities,” said Mr Callinan.

Under the Haddington Road agreement, higher earners – those on €65,000 a year or more – suffered a third, but temporary pay cut. By January 2018 this had been restored in full, as envisaged in the deal. Those who earned less accepted increased working hours to avoid a third pay cut. But, unlike their higher-paid colleagues, these workers have seen no restoration to pre-crisis working time levels.

Mr Callinan said: “These were torrid times for Ireland and, when the Government sought savings to fill an extra and unexpected €1 billion hole in the public finances, we agreed to talk and workers reluctantly voted to accept a third hit.

“By doing so we produced the savings that enabled the country to meet the harsh Troika bailout terms, and we avoided the imposition of another public service-wide pay cut under the hated FEMPI emergency legislation.

“It was the right thing to do at the time. But six years later we’re left with yet another two-tier public service problem, which leaves those on low and middle incomes – mainly women – losing out. This anomaly continues to disadvantage lower paid workers long after better-paid staff have experienced restoration. That’s not fair. However justifiable increased working time may have been during the crisis, it goes against the prevailing grain of efforts to better balance work and family responsibilities.”

A few years ago, when we were in the eye of the economic storm, I opposed similar conference motions. But I’d struggle to construct a convincing argument against them now, in light of our current economic performance and rapidly-developing technological possibilities.

Also speaking this evening, the elected chair of Fórsa’s Civil Service Division, Niall McGuirk, said civil servants now collectively worked 75,000 more hours each week than in 2013. “The extra hours imposed on our members under the Haddington Road agreement still rankle with many. While the Public Service Stability Agreement is unwinding the emergency legislation that introduced pay cuts in 2009 and 2010, the question of hours still needs to be resolved. Our average hourly rate of pay has decreased, with civil servants earning just 93% of what they earned ten years ago,” he said.

Mr Callinan also said his proposed mid-term review would be an opportunity to reconsider the underlying assumptions of the PSSA, and to take account of lost spending power, recent and projected growth rates, and pay movements in the wider economy. And he said public service agreements should also allow for individual grade claims to respond to enhanced responsibilities, higher qualification requirements, additional skills and increased productivity.

He said Fórsa wanted to restore and maintain full confidence in the PSSA, and Ireland’s model of public service pay determination. “It’s time to shift our focus from the past and focus on the challenge of delivering real improvements in wages and purchasing power,” he said.

Fórsa is Ireland’s largest civil and public service union with some 80,000 members in health, education, local government, the civil service, semi-state bodies, the community sector, and some private companies. Its civil service and local government conferences are taking place in Kilkenny this week.

Blog: In search of lost time

Kevin Callinan Public servants were applauded in 2013 when they accepted the Haddington Road agreement, which included a third pay
Read More
Next Article