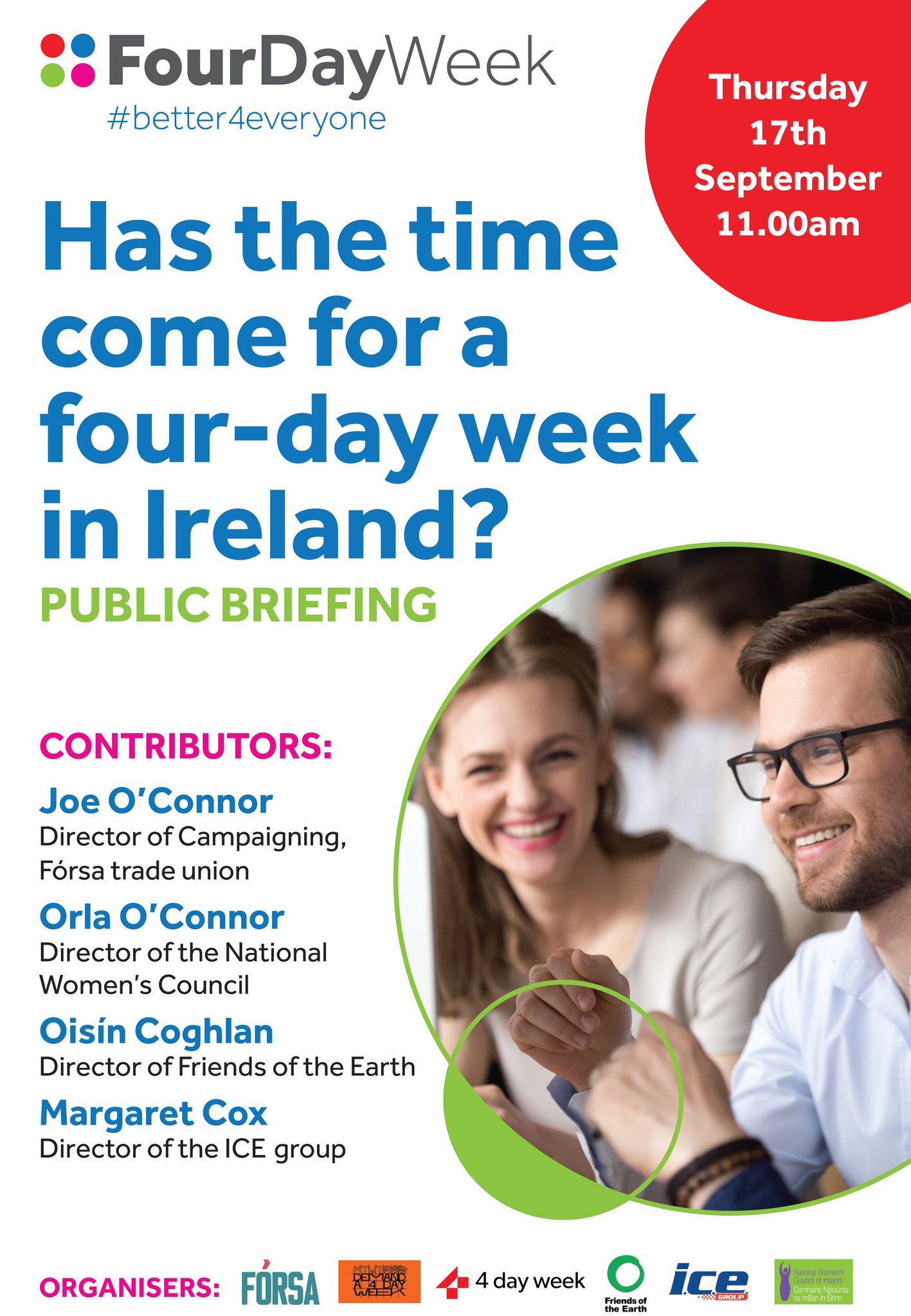 The Four Day Week Ireland campaign has today (Thursday) published the results of a new survey on public attitudes to a four-day working week. The survey, conducted last month by Behaviour & Attitudes (B&A), reveals a very enthusiastic response to the prospect of a four-day week in Ireland.

Two out of three respondents expressed the view that a four-day week (defined as “same job, same goals, same salary but over four days rather than five”) is “realistic and achievable” in the medium term, and a majority of employers who took part in the survey expressing the view that it is achievable.

Just over three-quarters (77%) of those surveyed said they are supportive of the Government exploring the potential introduction of a four-day week. Among employers, more than two out of three (67%) supported this.

A substantial majority (75%) believe that a four-day week would be desirable for employees, with a majority (59%) feeling it should be achievable for employers as well. Almost half of employers (46%) said they see trialling a four day week in their own workplace setting as “feasible.”

Factoring out undecided respondents, the survey result shows that more than 80% of those expressing an opinion feel it is a realistic and achievable ambition, while 93% would favour a trial.

The survey response to the concept of a four-day working week was strongest among younger adults and those working full-time.

The survey results were published ahead of a special online public briefing taking place today (Thursday), as the case for a four-day working week will be discussed with TDs and senators from across the political spectrum.

Joe O’Connor, director of campaigning with Fórsa trade union, said the survey results demonstrated a significant public appetite for a shorter working week in Ireland: “Close to half of employers see this as feasible in their own workplace, which is very encouraging, while a substantial majority believe the Government should explore this concept.

“The four-day week, with no loss of pay, offers the potential of a genuinely better future for workers and employers alike. When we launched this campaign last year, we were pleasantly surprised by the enthusiasm expressed by many employers, and the openness of some employer representatives to the idea. It’s  clear employers recognise the productivity potential of a four-day week, while some employers have already taken the first steps with very promising results,” he said.

Mr O’Connor added, “The strong support for a four-day working week among Irish people is consistent with similar studies internationally. What may once have seemed like a radical concept is now, for many, a reasonable and rational ambition. The Covid-19 pandemic has further disrupted societal and workplace norms, while illustrating the potential for very different models of work.

What may once have seemed like a radical concept is now, for many, a reasonable and rational ambition.

“We are now urging the Oireachtas Committee for Enterprise, Trade and Employment to commission an expert report on the feasibility of a four-day working week in Ireland, and consult with key stakeholders on this as part of their work programme,” he said.

The survey response to the concept of a four-day working week was strongest among younger adults and those working full-time. Professional and technical grades and those working in manufacturing, office or administration-based roles, retail and distribution showed the most enthusiasm for the four-day week concept.

Margaret Cox, director of ICE Group, a Galway-based recruitment firm which has been operating a four-day working week for more than a year, said: “Many employers may now see the possibilities, where previously this idea may have seemed unachievable. Given our own experience in ICE Group with the success of the four-day initiative, I believe Ireland is incredibly well placed to lead Europe and the world in making a real change in the way business runs, and consolidating our international reputation as a world class country, where business success and societal wellbeing go hand in hand.”

Reduced working time would allow men to spend more time with their families, take on more caring responsibilities, and this would help remove barriers to women achieving senior positions in work, and allow women to take on more training opportunities.

Orla O’Connor, director of the National Women’s Council (NWC) said the experience of Covid-19 demonstrated a need to reorganise working time: “A four-day working week would be particularly beneficial to women, allowing better distribution of caring responsibilities between women and men.

“Women still do the majority of care work. Reduced working time would allow men to spend more time with their families, to take on more caring responsibilities, and this would help remove barriers to women achieving senior positions in work, and allow women to take on more training opportunities,” she said.

Oisín Coghlan, director of Friends of the Earth, said: “It’s great to see such strong public support for the idea of the Government exploring the introduction of a four-day week. We’ve seen how employers and workers have innovated and adapted in the face of Covid, and how commuting doesn’t need to be central to the everyday experience of work.

“As we live with the virus, and ultimately move beyond it, there is an opportunity to continue to embrace ideas that boost productivity, reduce pollution and increase wellbeing. The four-day week is one of those ideas, he said.

Fórsa member Leonard Shiels (pictured) is the union’s candidate for the forthcoming Worker Director election in An Post. The role
Read More