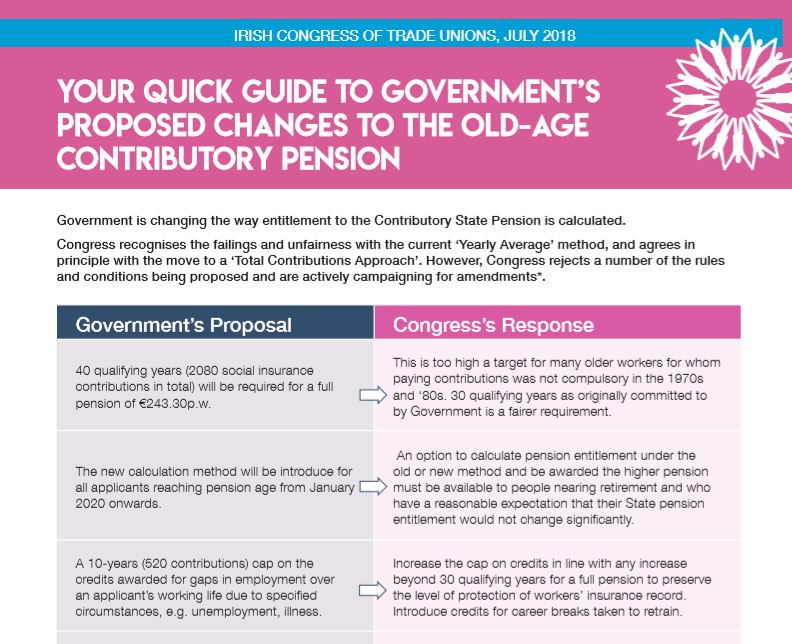 The Irish Congress of Trade Unions (ICTU) has backed the introduction of a ‘total contributions approach’ to pensions, instead of the current ‘yearly average’ approach. But Congress has also outlined criticisms of the Government’s pension reform proposals.

The union federation says that, while the proposed changes to the way contributory state pension entitlements are calculated addresses some failings of the old system, the number of qualifying years and contributions required to receive a full contributory pension is too high under the new proposals.

ICTU made the recommendations on proposed pension changes in a submission to the consultation on the total contribution approach.

Congress recognises the failings and unfairness with the current yearly average method, and agrees in principle with the move to a total contributions approach.

A factsheet summarising the submission says: “Congress recognises the failings and unfairness with the current ‘yearly average’ method, and agrees in principle with the move to a ‘total contributions approach’. However, Congress rejects a number of the rules and conditions being proposed and are actively campaigning for amendments.”

Congress also highlights the fact that Government proposals retain the minimum required contributions for a reduced rate pension, which is ten qualifying years or 520 contributions. ICTU says this should be reduced to the pre-2012 level of five years or 260 contributions.

Congress rejects a number of the rules and conditions being proposed and are actively campaigning for amendments.

It also says the cap on the number of credits awarded for gaps in employment for specified reasons, such as illness or unemployment, should be increased in line with any increase beyond 30 years in the required number of qualifying years or equivalent contributions.

ICTU praised plans to remove a limit on awarding backdated credits for caring periods to post-1994 only. Credits awarded for caring periods applies to time taken off work to raise children up to 12 years or to provide care to a sick relative of any age. It also notes the HomeCaring credit provision is “reasonable” for the protection of carer’s pensions by international standards.

The fact sheet is available here.

Fórsa to ballot for industrial action in section 39 organisations

Fórsa is to ballot for industrial action in selected in community, disability and social care providers after the Department of
Read More
Next Article