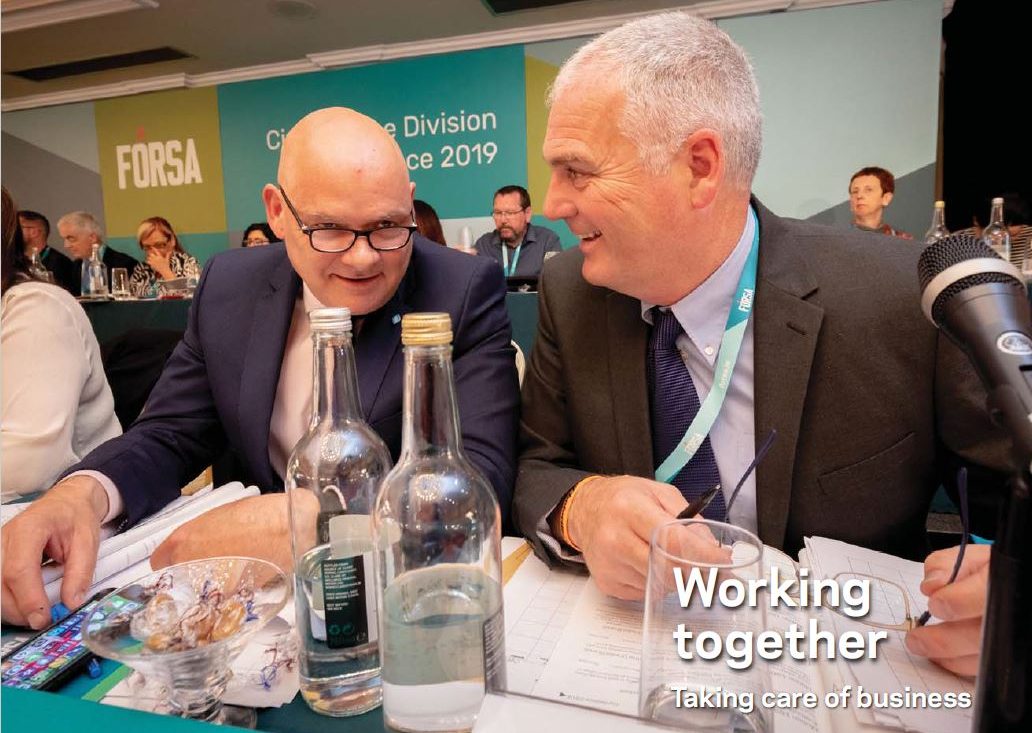 The latest edition of Fórsa magazine is rolling off the presses and will start making its way to workplaces and individual subscribers later this week. We have a digital version up on the website already, which is available here. In today’s blog post Fórsa editor NIALL SHANAHAN gives an overview of the latest edition.

Pause: take on the future

We might all be living in a noisy, fractious and hurried world, but it’s always worth taking a moment to stop, breathe, look around and try to stay in the moment.

In a way, we hope the magazine gives Fórsa members the opportunity to do exactly that, even if only for a moment.

After a full and busy divisional conference season, Fórsa activists and staff got stuck in to the 10th EPSU Congress, which took place in Dublin’s RDS in May. Our European guests seemed to have had a great time. I think the gauntlet thrown down by Michael D Higgins in his opening speech to conference definitely stirred their senses.

Our European guests seemed to have had a great time. I think the gauntlet thrown down by Michael D Higgins in his opening speech to conference definitely stirred their senses.

Aside from his well-publicised swipe at US President Donald Trump, Michael D set out the challenges facing the trade union movement in the face of a rapidly developing climate crisis. Senior General Secretary Designate Kevin Callinan further emphasised that climate change is the biggest challenge facing Ireland’s public services. Bernard Harbor digs deeper on what is probably humanity’s greatest challenge in this edition.

Michael D was similarly up-front and honest about how much work remains to be done to achieve true workplace gender equality, a challenge he said won’t be met until a balance is struck within the trade union movement itself. Hazel Gavigan takes a look at recently-revealed civil service figures that illustrate the scale of the challenge on that sector.

It was great fun to visit the Sligo branch recently and take part in their new podcast series, Stronger Together. Rodrigo and Irene have embraced the technology to find new ways to engage with members.

Technology, meanwhile, is being utilised to facilitate new forms of work and service delivery. But is this shiny new thing merely old fashioned exploitation in new clothes? Ashley Connolly had a stark warning at our Services and Enterprises conference in May, while Aingeala Flannery reveals the realities of the gig economy from within.

We’ve also got features on the permanent exhibition of Hugh Malala’s photos from Palestine, now on view in Fórsa’s Limerick office, as well as news and photos from the official opening of our new Galway offices.

We look at the work of Common Ground in Dublin’s South West inner city, who mark 20 years of building collaboration between artists and communities, and look at the union’s latest comments on working time and national agreements, in addition to industrial relations and campaign news.

We hope that you find plenty to chew on in this edition, but we hope too that there’s time for reflection as the summer passes, pleasant and slow.

You can download a PDF edition of the magazine HERE.