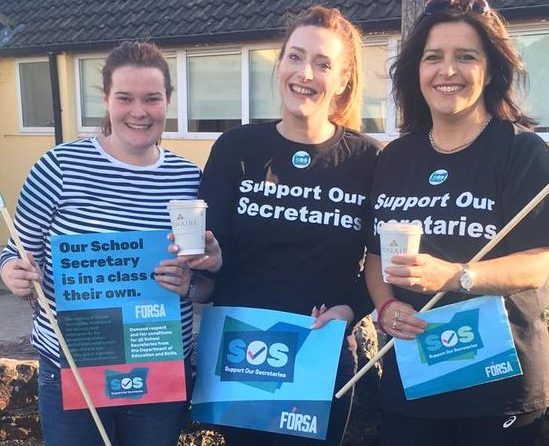 Fórsa has accepted an invitation from the Workplace Relations Commission (WRC) to attend fresh negotiations with the Department of Education and Skills aimed at ending the long running dispute over the employment status and conditions of school secretaries and caretakers. The next meeting at the WRC will take place on Tuesday 27th October.

Fórsa’s head of education Andy Pike explained: “The invitation to fresh talks followed the intervention of Leo Varadkar on the 8th October, committing the Government to the regularisation of pay, conditions and pensions of secretaries and caretakers.”

Fórsa has agreed to defer the planned industrial action in order to ensure that these fresh talks have the best possible chance of success.

Fórsa has agreed to defer the planned industrial action, which was due to commence on 23rd October, in order to ensure that these fresh talks have the best possible chance of success.

Andy added: “We thank the WRC for intervening in this dispute. All parties now recognise that Government policy on this issue has shifted hence the need for more discussions, we hope to see this reflected in the approach taken by  negotiators from the department.

“School secretaries and caretakers will rightly expect Mr Varadkar’s commitments to be followed up with concrete measures to satisfactorily address their pay, conditions and pension provision,” he said.

Last week the union confirmed its intention to serve notice of industrial action in the continuing dispute with the Department of Education and Skills due to a long standing two-tier pay system that leaves most school secretaries earning just €12,500 a year, with irregular, short-term contracts that force them to sign on during the summer holidays and other school breaks.