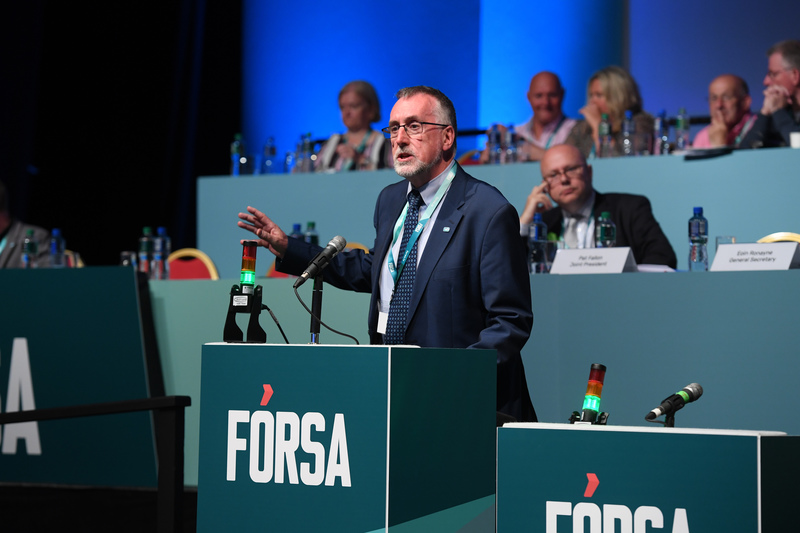 Fórsa is to seek discussions with the Government and Ibec on the development of a formal social dialogue forum that can discuss – and reach agreement on – public policy issues that affect workers and business, but which cannot be resolved at workplace level.

Speaking at the union’s national conference in Killarney today (Friday), its senior general secretary Shay Cody said workers needed a platform where they could discuss and deal with economy-wide and society-wide problems. And he said business groups were in favour of this too.

There should be a place for the three parties – government, unions and employers – to come together to seek to improve workers’ living standards and business performance.

Mr Cody accepted that there was no immediate prospect of a return of social partnership agreements covering pay and taxation because “the current Government does not want it, and there is no trade union consensus in favour of it.” But he said there “should be a place for the three parties – government, unions and employers – to come together to seek to improve workers’ living standards and business performance.”

Last November’s Gothenburg summit of EU leaders agreed on the need to develop a well-functioning social dialogue while, here in Ireland, Ibec has also agreed with the Irish Congress of Trade Unions (ICTU) on the need for a place to talk to government on issues that affect workers and businesses.

Mr Cody said social dialogue in Ireland must be expanded to deal with issues like the cost of housing, the cost of childcare and eldercare, the pension crisis, collective bargaining, employment rights and training. “These are issues of interest and concern to both sides of industry, and to society more generally. But they cannot be addressed, let alone resolved, at the level of the individual workplace or company.

Ibec has also agreed with ICTU on the need for a place to talk to government on issues that affect workers and businesses.

“We have recently established a ‘Labour-Employer Economic Forum (LEEF), involving government, business and unions. That must now be developed further to create a platform where issues that affect workers outside their immediate workplace can be discussed. A place where we can engage with the whole of government – not just individual ministers or departments – on important topics that impact on livelihoods and living standards,” he said.

A motion put to the conference by Fórsa’s National Executive Committee called on the ICTU to take up the issue with Government. Mr Cody said Fórsa would vigorously pursue a form of social dialogue at home, and across the EU, that can improve the living standards and living conditions of working people.