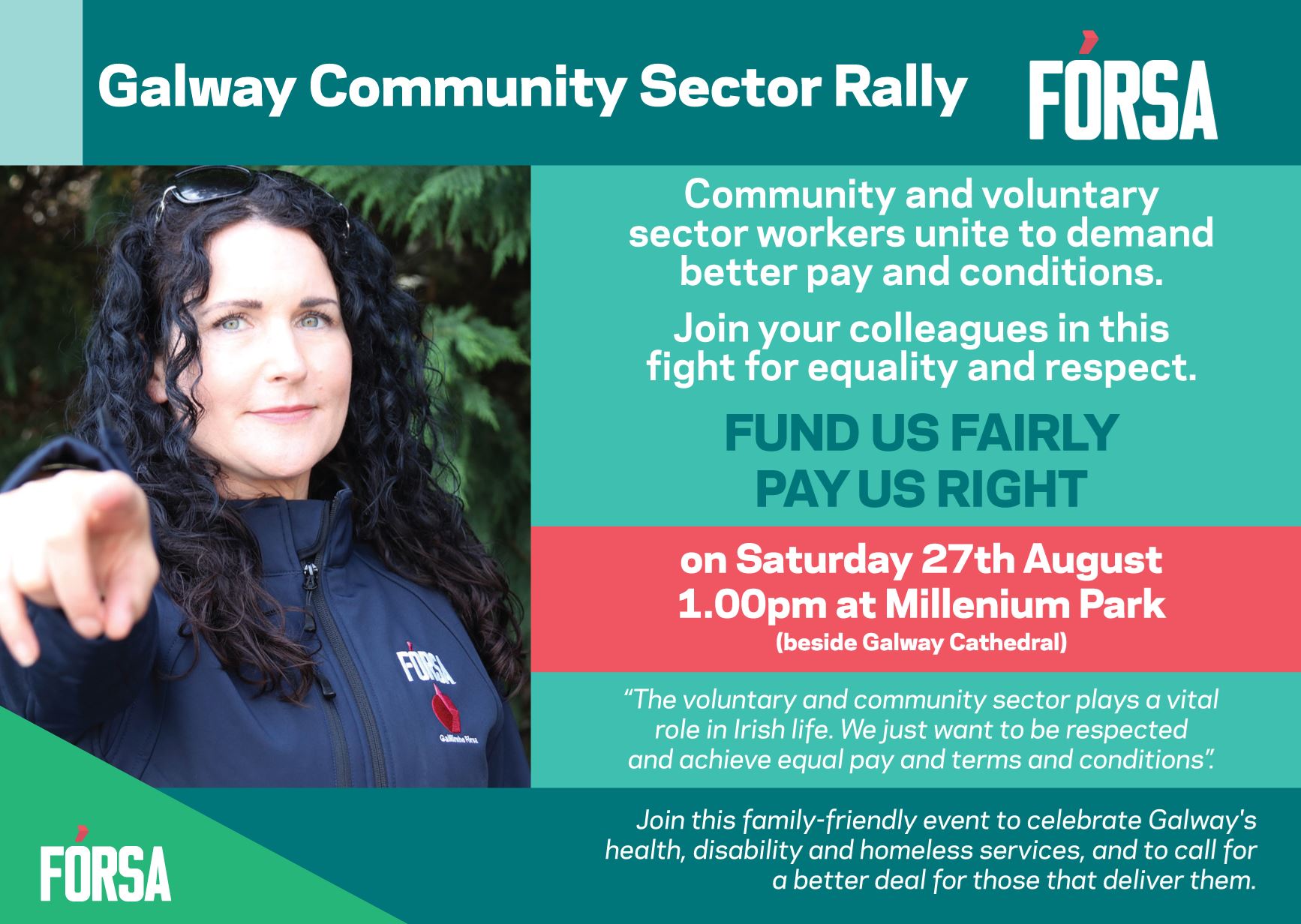 The event marks the beginning of an escalation of the union’s campaign for a better funding model, and improved pay, in the community and voluntary sector as Fórsa begins preparations to ballot members for industrial action from September.

Fórsa was one of the unions to recently announce that workers in the care, community and voluntary sector will escalate their campaign of industrial action to secure a first pay rise in 14 years after the Government failed to engage following strikes in selected workplaces in July.

Fórsa official Pádraig Mulligan said the Fund Us Fairly, Pay Us Right rally in Galway will draw support from Fórsa branches around the country and the local community.

The ICTU ‘Valuing Care, Valuing Community’ campaign committee is to ballot members across the sector for an intensified campaign of industrial action, commencing in September and extending countrywide thereafter. The campaign is supported by the ICTU, SIPTU, Fórsa and the INMO.

The head of Fórsa’s Health and Welfare Division, Ashley Connolly accused the Government of failing to grasp the link between its chronic underfunding of the services and the failure to meet the HSE’s recruitment targets in disability services and elsewhere.

“The HSE leans heavily on the community and voluntary sector to deliver these services. These are the same organisations struggling to attract enough qualified and experienced staff in a very tight labour market. Why? Because they can get better paid work elsewhere.

“Fórsa has already established there’s an annual staff turnover of around 30% in this sector*, which drives up HR and related recruitment costs. The failure to fund the services adequately has led directly to shortfalls in services and growing waiting lists,” she said.

Fórsa official Pádraig Mulligan said the Fund Us Fairly, Pay Us Right rally in Galway will draw support from Fórsa branches around the country and the local community.

“This will be a family-friendly event, designed to boost awareness of services in health, disability and homeless services in Galway under severe pressure because workers are not getting a fair deal from employers.

“We have people in the same grades in different employments, delivering the same services, who are on different rates of pay. This is because those agencies funded by the HSE cannot deliver any pay improvements. As a result, staff are moving on to where they can earn a better wage,” he said.

Health service clerical, administrative and management staff are among the workers set to receive a 1% pay adjustment with effect
Read More