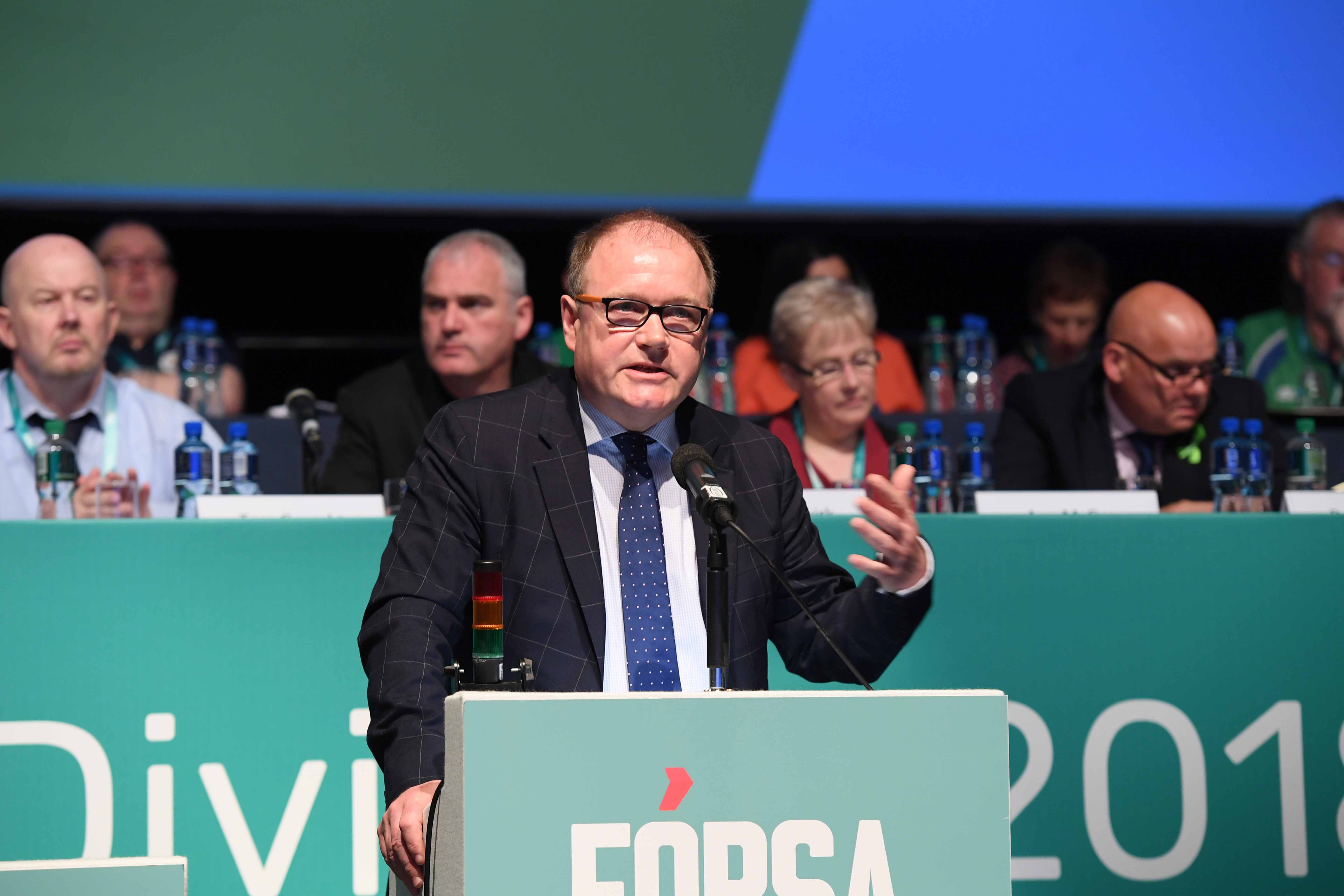 Fórsa has called on the Government to allocate funds in October’s Budget to begin shortening pay scales for public service ‘new entrants’ next year. This would be at least a year sooner than envisaged in the current public sector pay deal, the Public Service Stability Agreement (PSSA).

Speaking to 700 delegates at Fórsa’s Civil Service division conference in Killarney, general secretary (Public Service) Tom Geraghty accepted that no money was budgeted to resolve the injustice in 2018.

“While it is correct to say that no monies have been allocated to do this in 2018, I believe that Ireland’s strengthening economic and exchequer recovery means it should be possible to start funding it next year, rather than delaying until 2020 or beyond. That would require funds to be allocated in October’s Budget,” he said.

Tom Geraghty told the conference that pay equity was a priority for all trade unions, which had addressed the inequity in various national pay talks.

As secretary of the ICTU Public Services Committee, Mr Geraghty is a member of the union team due to meet senior Department of Public Expenditure and Reform (DPER) officials to discuss the matter next Friday (27th April). The talks are taking place under the PSSA agreement, negotiated last summer, which allows for an “examination” of the new entrants’ pay issue.

The term ‘new entrants’ refers to those employed in the civil and public service since January 2011. Their pay scales are currently two points longer than those of other staff, which means it takes them two years longer to get to the top of their pay scale.

Mr Geraghty said next week’s discussions would focus on equalising the length of pay scales. This would mean exploring the technical challenges presented by the fact that the length of pay scales varies widely across the civil and public service. Unions also want to ensure that any solution is fair to all new entrants, regardless of how long they have been employed.

Geraghty told the conference that pay equity was a priority for all trade unions, which had addressed the inequity in various national pay talks.

“The imposition of two-tier pay scales, which were 10% lower at each point for new staff, were imposed in January 2011. They were among the many cuts, including pay cuts averaging 14% for all civil and public servants, imposed without agreement by the then-Government in 2009-2010.

Every bit of progress in addressing this injustice has been achieved by unions collectively, through national pay negotiations and public service pay agreements.

“Since then, every bit of progress in addressing this injustice has been achieved by unions collectively, through national pay negotiations and public service pay agreements.

“We took the first opportunity to address the injustice in the negotiations that led to the 2013 Haddington Road Agreement. As a result, the two-tier pay scales were scrapped. But new entrant pay scales retained two extra points and, therefore, those employed since the start of 2011 still have to work two more years before reaching the top of their scales.

“We returned to the issue in the talks on the current public service pay deal and, because of this, we will again be negotiating with DPER officials next week, with the aim of equalising the length of pay scales. As well as dealing with the technical challenges of doing this fairly, in a way that works for public servants with different lengths of service – and pay scales of vastly different lengths – we will press for the scales to be shortened as quickly as possible.” he said.

In initial discussions last October, DPER confirmed to unions that 53,000 workers had been hired since lower new entrant scales were imposed in January 2011. Management also acknowledged that unions had opposed the new scales, and had used the first opportunity available – the Haddington Road Agreement – to equalise the maximum points of the scales.

The full text of Tom Geraghty’s speech is available HERE.

Fórsa trade union welcomes today’s announcement by the Minister for Employment Affairs and Social Protection, Regina Doherty, that she will facilitate
Read More