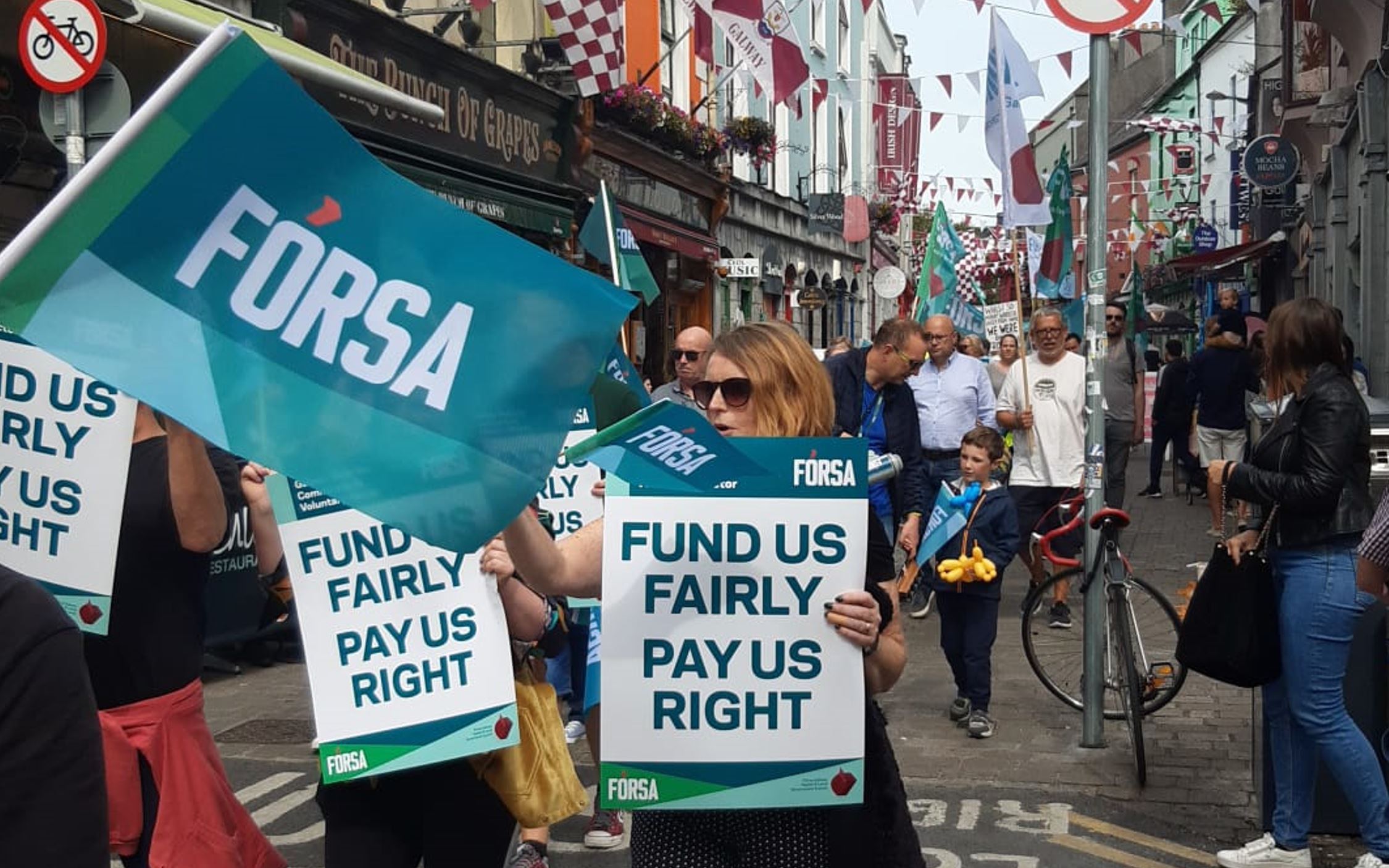 Fórsa’s national executive has backed a proposal for indefinite strike action in a number of community and voluntary sector agencies funded by the HSE.

The action is likely to involve hundreds of health and care staff, in a number of agencies selected by the union. The union has also committed to footing the wage costs of striking staff.

‘Section 39’ agencies provide a range of residential and day services for people with disabilities, mental health, addiction, domestic and sexual violence services, and other supports, under service level agreements with the HSE. Similarly, Section 56 agencies operate in a similar way for children’s services, funded by Tusla.

While these agencies are funded by the state, their employees in a range of health professional, clinical, clerical and administrative grades, are on lesser terms and conditions than their HSE counterparts.

Fórsa general secretary and Irish Congress of Trade Unions (ICTU) president Kevin Callinan said: “As one of the main representative unions involved, Fórsa has decided to call time on the Government’s dragging of its own feet on this issue.

“The union’s executive has backed the decision to identify a number of these employments and to organise indefinite strike action to highlight this ongoing pay inequality, which simply cannot be sustained.

“Up to a third of experienced professional health and care staff are leaving their jobs in these agencies every year to take up better remunerated employment with the HSE and elsewhere.

“We will ballot for indefinite industrial action in a number of employments, and Fórsa will foot the wage costs of those staff who go on strike. Services will simply be brought to a halt. At this stage, no other course of action will drive the point home,” he said.

Mr Callinan added that while limited strike action by Fórsa members in Galway, Mayo, Cork and Kerry last year garnered strong support from across the political spectrum, he said neither the Government, Department of Health or the HSE have since taken any meaningful action to address the issue, and workers continue to be left behind.

He added: “On the one hand, the health minister acknowledged in the Dáil last October that the Government is the ‘main and often sole funder’ of these organisations, and that its funding affects the ability of agencies to improve pay and conditions.

“On the other hand, it has spectacularly failed to grasp the link between its chronic underfunding of the services and the subsequent failure to meet the HSE’s recruitment targets in, for example, disability services. For every member of staff freshly recruited, another experienced staff member is walking out the door. The situation is both unacceptable and unsustainable.

“Government action is essential. It needs to address the funding of organisations in the sector, to make pay improvements for staff, stem the high rate of staff exits each year and fulfil recruitment targets for vital health services, including disability and homeless services,” he said.

Until 2008, workers in these agencies received pay increases under national wage agreements. At the onset of the financial crisis they were subject to FEMPI pay cuts in line with the same cuts applied to public sector pay. Limited pay restoration measures were eventually won by unions in 2019 but pay in these agencies remains significantly behind, and no formal mechanism for collective pay bargaining exists for workers in the sector.

Fórsa’s research has revealed that recruitment and retention of professional health staff in these employments has become a major challenge. The union said Section 39 employers are burdened with higher recruitment costs and growing waiting lists for services.

Solidarity with UK unions on national ‘right to strike’ day