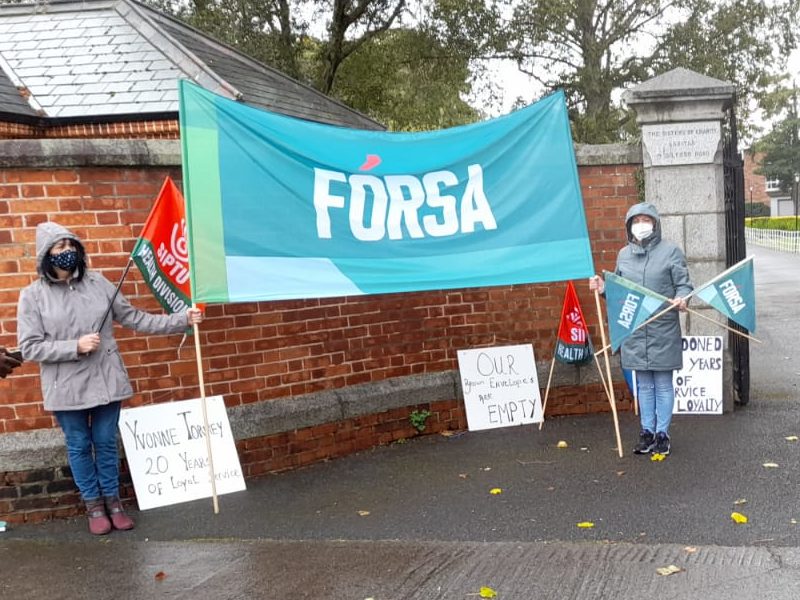 Members of Fórsa, the INMO and SIPTU trade unions have today (Monday 28th September) commenced a daily lunchtime protest at the Sisters of Charity’s headquarters at Gilford Road in Sandymount, Dublin.

The protests, which will observe the Level 3 Covid protocols that apply in Dublin, are taking place because Sisters of Charity staff have been denied fair redundancies despite a Labour Court recommendation last month requiring the HSE and Sisters of Charity to come to a fair conclusion.

The staff involved were let go after a “sudden” liquidation, and unions have repeatedly requested a meeting with the Sisters of Charity, but have been denied a meeting or any commitment to fair redundancies for the affected staff.

The protests by former staff are set to continue daily between 12 noon and 1.30pm.

Fórsa official Seán McElhinney said: “The Labour Court has justified our position and recommended that the Sisters of Charity and the HSE get around the table, and pay what our members are due.

“We will not permit the Sisters of Charity – or the HSE – to hide from our campaign. As long as they continue to avoid us, we will continue to bring the fight to them. Be in no doubt; we are in this to win,” he said.

Lorraine Monaghan, Assistant Director of Industrial Relations at the INMO, said: “The unions have written to the Sisters of Charity for the seventh time since early August. We are simply seeking a discussion to resolve this problem.

“This is an incredible frustrating time for our members, many of whom are now questioning the sincerity of the Sisters’ stated intention to make a payment to staff.

“We are offering the Sisters an opportunity to correct this. Meet with the unions, discuss the issues, and we can work together to alleviate the financial hardship faced by the loyal staff,” she said.

SIPTU Industrial Organiser, Brian Condra, said: “The failure of the employer to respond over the past month is frustrating matters and our members are increasingly coming to the view that the Religious Sisters of Charity (RSC) intention may not be sincere.  They need to engage with us urgently to ensure the former staff in all three sites owed by the RSC are treated fairly, it is necessary that we meet and engage in real and meaningful discussions without further delay.”

Fórsa has backed a new initiative by Mandate and the Irish Congress of Trade Unions (ICTU), which seeks new legislation
Read More
Next Article