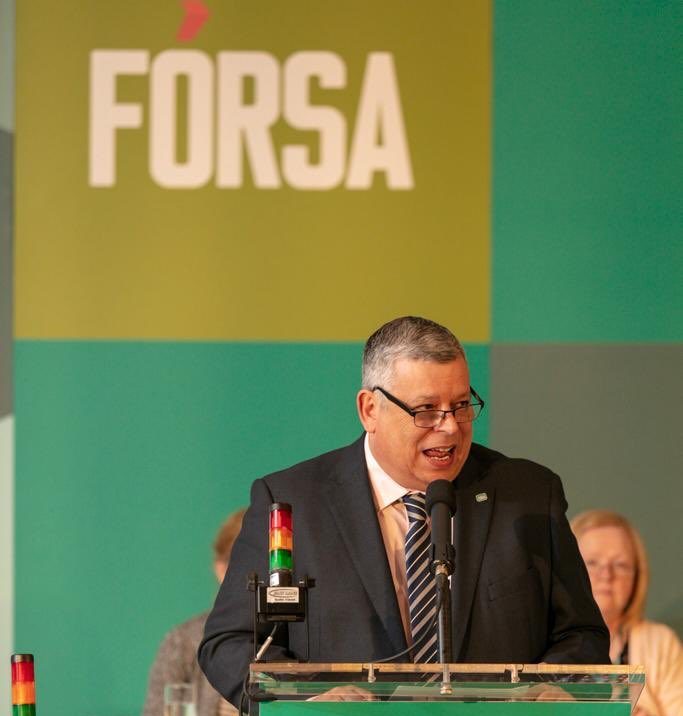 The Department of Education and Science has belatedly agreed to consult with Fórsa, the union that represents special needs assistants (SNAs), on recommendations from the Council for Special Education (NCSE), which the union says could have far reaching implications for schools and students.

The proposals for a new ‘schools inclusion model’ also have significant implications for SNAs, who were originally excluded from a consultation with “schools, teachers and parents,” announced by education minister Joe McHugh last month.

Speaking at the union’s education division conference in Carrickmacross today (Thursday), Fórsa senior official Andy Pike (pictured) said the union would engage in consultation with a view to improving services to children with special needs, while protecting SNAs’ working conditions. But he said he would seek to renegotiate the SNAs’ contract “to establish parity with conditions of service for others in education and address long-standing problems” if the new model led to increased responsibilities and work demands, as expected.

Head of division Andy Pike said he would seek to renegotiate the SNAs’ contract “to establish parity with conditions of service for others in education and address long-standing problems” if the new model led to increased responsibilities and work demands.

Last month, education minister Joe McHugh announced his intention to pilot the proposals in 75 schools in Kildare, Wicklow in the 2019-2020 school year.

He also welcomed plans for a voluntary national training programme for SNAs, which would “take the first significant step towards professionalisng the role of the SNA within our schools sector.”

Mr Pike said plans to frontload allocations of SNAs to schools “could reduce the incidence of precarious employment experienced by many SNAs.” The union has frequently complained about the late announcement of annual SNA allocations to schools – which created uncertainty over service levels and job security – often late into the summer preceding the new school year.

“Fórsa is more than willing to work with the education department, the NCSE and schools to improve the service that thousands of SNAs provide to children with special needs each school day. But this needs to be done in a spirit of respect and consultation with SNAs who deliver the service. And we need to see more detail before a properly informed view can be established,” said Mr Pike.

The union believes the proposal to front-load the allocation of SNA posts on a two-three year cycle offers the prospect of permanent SNA posts for the first time. “We want to crystalise what appear to be genuine opportunities to improve the standing of SNAs in the schools system once the new schools inclusion model is agreed and rolled out over the next few years,” said Pike.

But the union also expressed concerns that proposals to give SNA’s additional training to meet complex medical needs could undermine their role in educational support. “We need to ensure that the role remains primarily focussed on providing educational support,” said Mr Pike.

Mr Pike told conference delegates: “If the schools inclusion model is agreed, if it is rolled out to every school and if, as we think, it requires members to assume new responsibilities with a new educational framework, then Fórsa will seek to negotiate a new contract for SNAs reflecting these increased demands, a contract that seeks to establish parity with conditions of service for others in education and which addresses the long standing problems with the 72 additional working hours introduced during the economic crisis.”

The failure to engage with SNAs, with their collective professional experience and skills, represents a fundamental weakness in the NCSE review.

Claire Keaveney of Fórsa’s North Dublin/North Leinster SNA Branch, told delegates that consultation on changes that affect working conditions is a requirement of the Public Service Stability Agreement (PSSA). “As a union, we have fought to maintain the value and integrity of the SNA service since it was first introduced. We have worked closely with children with special education needs, their families, and their schools, to deliver a quality experience for every child who has accessed the service.

“That experience must be recognised and valued as these changes are piloted and rolled-out. And, I have to say, we were discouraged by the way the NCSE review of the SNA scheme was conducted and published without any serious engagement with Fórsa or with SNAs.

“That failure to engage with SNAs, with their collective professional experience and skills, represents a fundamental weakness in the review itself. We need to see a change of approach. Ignoring SNAs risks undermining the service we provide to vulnerable children and, indeed, to our working conditions, which already place us among the poor relations of the school community,” she said.

Fórsa has today (Thursday) called on the Minister for Education and Skills to put school secretaries, who are employed by
Read More