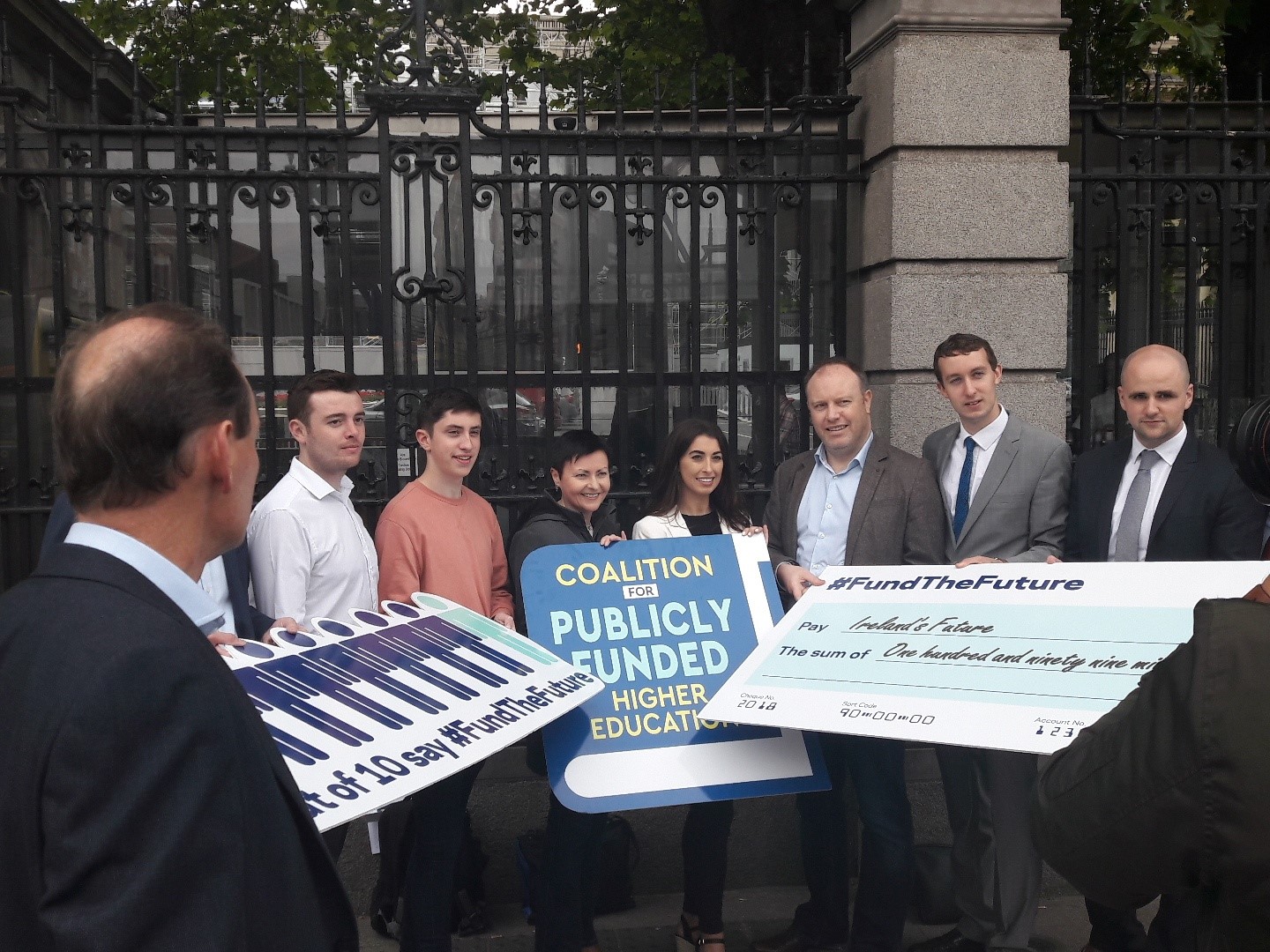 91% of people who expressed a preference want increased investment in higher education, according to opinion research carried out by polling organisation Behaviour & Attitudes (B&A) for the Coalition for Publicly-Funded Higher Education.

Between 54% and 70% of all age groups said they agreed strongly with the statement ‘public investment in the higher education sector should be increased,’ with support strongest among under-25s.

Support for increased public investment was strong among all social classes, with only 8% of all respondents saying they disagreed.

Publishing the survey results at an event in Dublin last Wednesday (13th May), the Coalition for Publicly-Funded Higher Education called for a minimum investment of €199 million to be allocated for 2019 in the forthcoming Budget.

The coalition, which is made up of student bodies and trade unions representing higher education staff, said the figure was based on Fine Gael manifesto promises and the Cassells report into higher education funding, both of which said investment of €100 million a year was the minimum annual investment necessary just to keep pace with demographic changes.

The current Government’s first two budgets fell far short of this. They earmarked spending of just €101 million for higher and further education over two years: €36.5 million 2017 and €64.5 million in 2018.

The campaign coalition wants the shortfall of €99 million, plus €100 million for next year, to be allocated to higher education in 2019.

The coalition also unveiled an updated policy document called Making the case for publicly-funded higher education. It argues that a 10% reduction in higher education staffing since 2008 is equivalent to a 30% cut in financial support for the sector, where modest recent increases in funding have failed to keep pace with increased student numbers.

The report is strongly critical of proposals to introduce student loans which, it says, would increase personal indebtedness in a country where household debt is the third highest in the EU, while deterring potential students from poorer backgrounds from accessing higher education.

“Far from being a radical idea, higher education systems mostly funded from public sources are the norm, while fully-free public education exists in many strong and competitive economies,” it says.

It’s resoundingly clear that the Irish public place a huge value on our higher education system and the role it plays in our economy and society.

Speaking at the launch event, Fórsa lead organiser Joe O’Connor said: “It’s resoundingly clear that the Irish public place a huge value on our higher education system and the role it plays in our economy and society. We are calling on the Government to meet the minimum funding, set out in both the Cassells report and Fine Gael’s own manifesto, required to ensure that higher education in Ireland can continue to deliver on quality, access and affordability.”

USI president Michael Kerrigan said: “Since 2008 we have seen a 375% increase in the student contribution, accompanied by falling university rankings, Institutes of Technology in financial difficulties, and facilities that are not fit for purpose. Ireland invests just 1.2% of its GDP in higher education, compared to an OECD average of 1.6%. Something has to change.”

Luke Casserly, secretary of the Irish Second-Level Students’ Union said: “Investing in higher education is logical on many levels. It provides a more educated workforce with greater access to higher-paid jobs, which incentivises people to work and keeps them off welfare. We must ensure that debt does not become the cost of education.”

Frank Jones, deputy general secretary of the Irish Federation of University Teachers (IFUT) said that the figure of 91% support for increased public investment in higher education sends a powerful message to Government in advance of the next Budget. “Third-level education has been increasingly starved of state funding for the past decade. The public clearly knows this and the Government must now respond by increasing allocations in a real meaningful way in the next Budget,” he said.

SIPTU Education division chairperson Maggie Ronayne said: “The nature and quality of employment within academia is as much an issue as increased student-teacher ratios. Years of underinvestment and reduced staffing has taken its toll on the entire third level sector. The entire sector is rife with precarious employment, outsourcing and gender equality issues and this has made it virtually impossible for workers to aspire to a decent secure job and pension.”

When presented with the statement ‘Public investment in the higher education sector should be increased,’ the results were:

Women should all strive to be leaders – Fórsa president

Organisations with fewer women in senior roles are losing out on the widest range of talent available to them, according
Read More