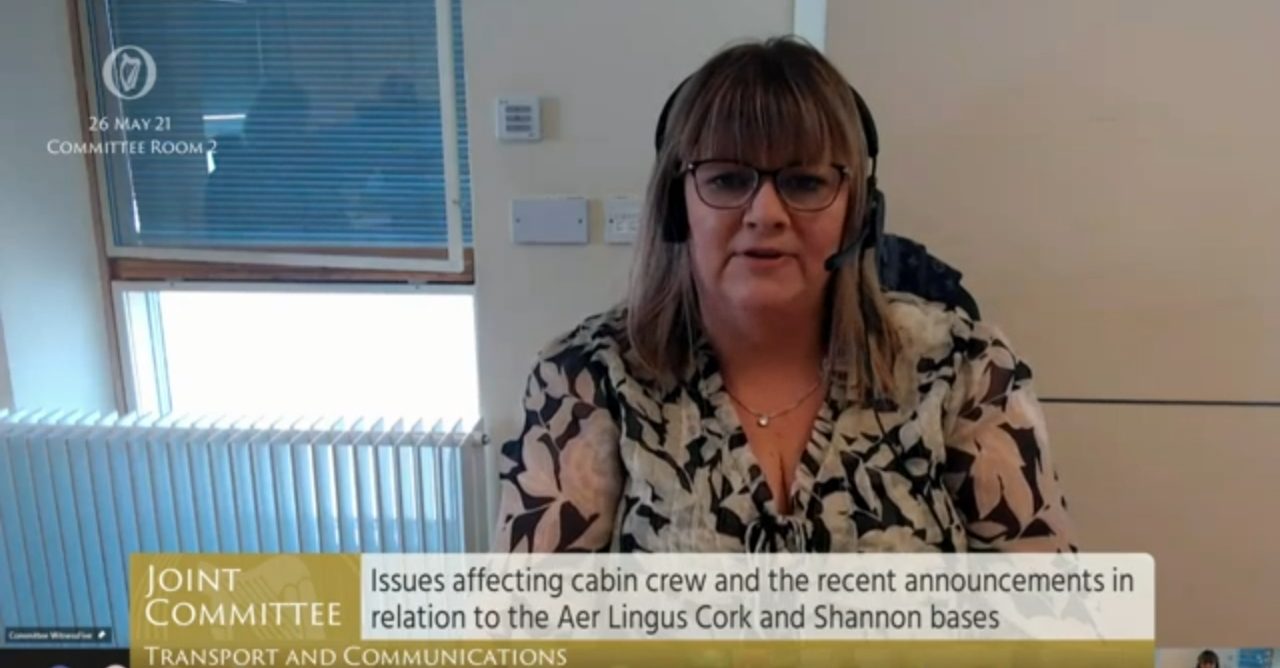 The Joint Oireachtas Committee on Transport and Communications Networks has been warned this afternoon (Wednesday 26th May) that airlines operating in Ireland have the flexibility to move aircraft to more open markets to meet demand, and that Ireland risks being left behind, putting thousands of jobs at risk, if the Government fails to provide leadership, clarity and certainty for the aviation sector.

The warning was issued by Fórsa national secretary Ashley Connolly in her opening comments to the committee. Ms Connolly spoke on behalf of Fórsa’s 5,000 members in airlines, airports, air navigation bases, aviation regulatory bodies, and air traffic control. Members of Fórsa’s Cabin Crew branch, representing over 2,000 cabin crew across all airlines, were also in attendance.

Ahead of tomorrow’s expected announcement on the reopening of international travel, Ms Connolly said there was an urgent need “to do better” and to provide political leadership with a clear roadmap setting out the return to international travel: “To date we have seen a lack of commitment from Government on how and when travel can resume. We need to remain as a globally connected open economy where trade and tourism thrive.”

Airlines operating in Ireland have the flexibility to move aircraft to more open markets to meet demand and Ireland risks being left behind, putting thousands of jobs at risk.

Ms Connolly said the union had previously called for State support to the industry to be strictly conditional: “No compulsory redundancies or offshoring of services. If these conditions had been in place it may have offered our members greater protection against the devastating news in Shannon and Cork last week.

“We remain hugely concerned that failure to provide the necessary supports – as a matter of urgency – may mean further announcements across the sector. Some, like the situation in Shannon, that might be irreversible, and contribute to a more general erosion of Ireland’s aviation connectivity,” she said.

Ms Connolly said Cabin Crew had endured over fourteen months of pay cuts, lay-offs, redundancies and job insecurity: “Our members continue to live with high levels of uncertainty and have lived with fear and anxiety, of what the future holds for them. This has put cabin crew and aviation workers and their families under massive strain. For many, the mortgage and other debt incurred during this period will be a burden for years to come.”

We need to remain as a globally connected open economy where trade and tourism thrive.

She said members remain concerned that the current wage subsidy scheme is due to end in June: “There has been no announcement of an extension to date. We have all heard the comments that there will be “no cliff edge” but, put simply, these statements are not enough. The lack of any detail contributes to our members fear and anxiety.

“Fórsa has been calling for an aviation specific income support scheme to be put in place – failure to do so have no doubt will put in place the risk of further hardship for our members and more jobs will be lost,” she said.

Ms Connolly said cabin crew had been deemed essential workers during the pandemic and continued flying essential routes to maintain vital connectivity, and that it has been widely acknowledged that the Irish aviation sector has experienced the largest decline in Europe over the past 15 months.

On the announcement of the closure of the Aer Lingus Shannon cabin crew base last week and temporary layoffs in Cork later this year, Ms Connolly said Aer Lingus cabin crew had, throughout numerous crises, altered their work practices, and demonstrated flexibility to ensure the viability of the Shannon base: “But last week Aer Lingus appeared to simply give up rather than develop solutions.

“Our members feel strongly about wanting to work with the company to find solutions in order to protect the base. They are angry at the company for its decision to close the base without engagement to find solutions, and the manner in which they delivered this devastating news.

“Equally, they are angry at their elected representatives for not ensuring the appropriate protections were in place, such as supports only being provided on the conditions Fórsa has previously outlined. The closure of Shannon illustrates the consequences of failing to include that conditionality,” she said.

Expansion of community-based health staffing should be fast-tracked

Fórsa has called on the HSE to fast-track plans to recruit 7,000 community-based health staff over the next three years.
Read More
Next Article

Voluntary sector will collapse without a new funding model

Fórsa trade union has warned that the wide range of specialist health services delivered by the community and voluntary sector,
Read More