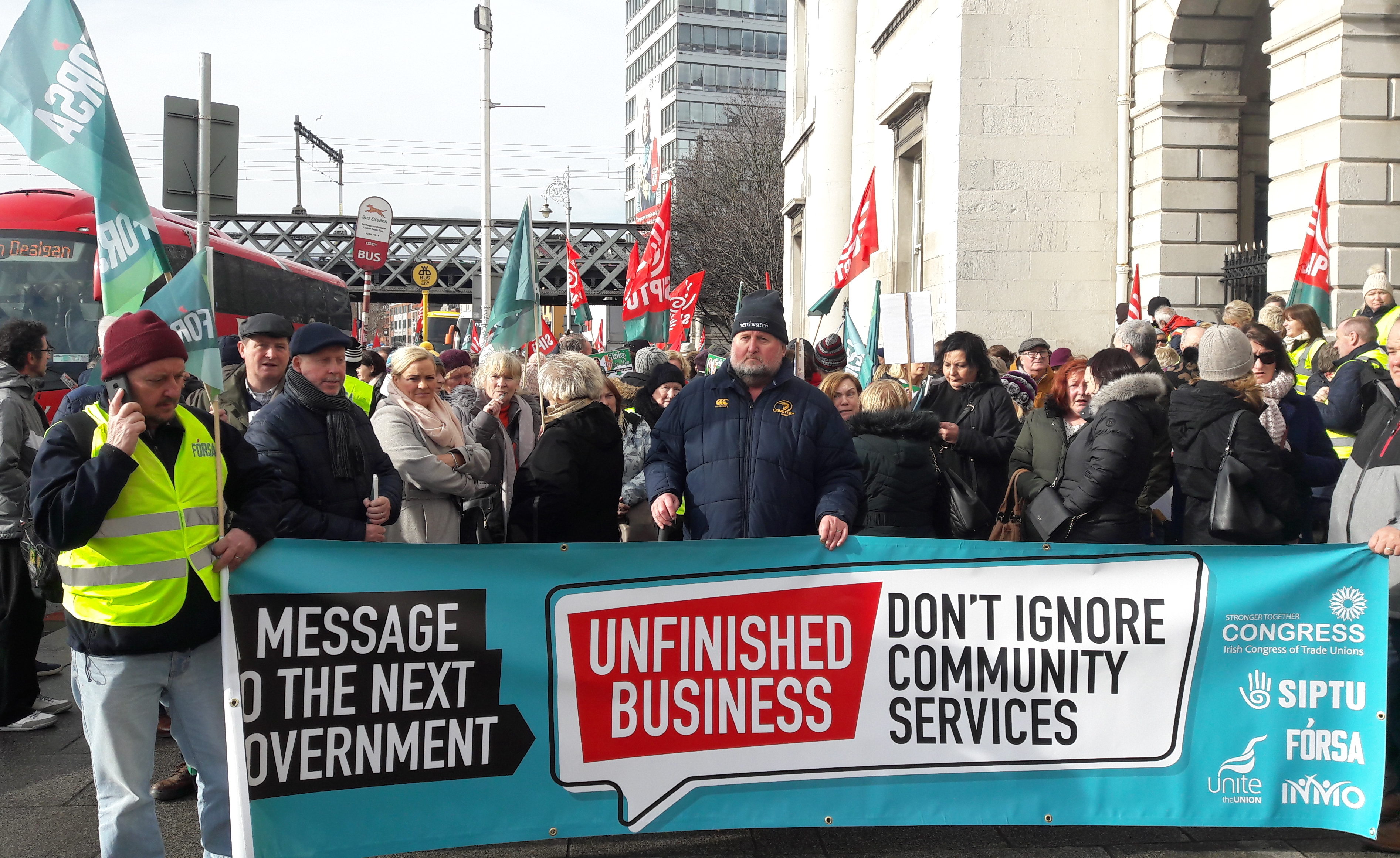 Fórsa members employed by the National Council of the Blind in Ireland (NCBI) and Delta services CLG in Carlow are taking part on a one-day strike today (Friday 21st February) marking the latest phase of the union’s campaign for pay justice in independent organisations that rely on State funding to deliver vital health and care services.

Both employments are ‘Section 39’ agencies, under which community and voluntary sector organisations are funded to deliver care and other services by the HSE. Members of SIPTU in other Section 39 agencies are also on strike today (Friday). While these workers are not public servants, their pay was cut in line with public service pay cuts applied during the economic crisis.

Fórsa’s General Secretary Kevin Callinan said: “Section 39 workers were forced to organise and to threaten action to get a hearing, and while we made progress, the government failed to deliver what was required to complete the agreed pay restoration process. That’s not good enough.

Fórsa official Catherine Keogh said every stage of pay restoration for workers in the Section 39 agencies has been hard fought. “It has been a test of endurance for people who deliver vital health services in the community, for whom other work opportunities means we’re now witnessing much higher staff turnover in employments providing vital care services.

“The failure to complete the pay restoration process is putting the sustainability of these services at risk, which would place the burden of service delivery back on HSE. The incoming government, however that is eventually composed, must recognise that resolving issues like these would be beneficial for service users. It’s another piece of unfinished business left behind by the last government,” she said.

Jacintha has worked for six years as a social care worker with Delta services CLG, which provides day and residential care to adults with physical and intellectual disabilities.

“I’m taking part in today’s work stoppage because we’ve been left with no other choice really. We’re fighting for pay justice.

“Agencies like ours seem to be the poor relation when it comes to pay restoration. There’s been pay restoration in the public sector and the larger Section 39 agencies have had pay restored but only after they fought for it.

“Now we’re having to fight for it too. It shouldn’t have come to this, our pay should have been restored in line with the other organisations.

“We work hard. We provide a valuable service. We should be paid accordingly. The delay has led to this strike action which has unanimous support among the staff.

“They feel very strongly about this and our union membership has increased as a result. They recognise that we’ve fallen behind where we should be in terms of pay and that it’s time to take a stand.

“We just want a fair day’s wage for the work we do, and that’s not happening right now. The HSE need to step up and resolve this by restoring the pay cut imposed during the economic crisis. Things have moved on. There’s no excuse for leaving workers like us behind.”