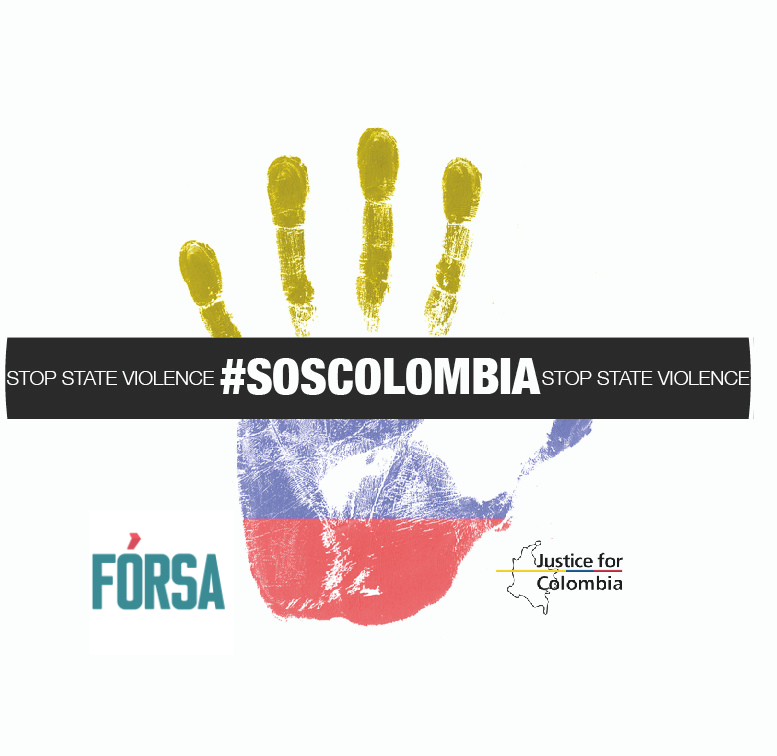 Fórsa will be one of a number of trade unions taking part in today’s online action (Thursday 3rd June) in support of human rights in Colombia, organised by the Justice for Colombia (JFC) campaign.

Colombia has seen nationwide trade union-led mobilisations in support of economic justice, human rights and peace since April, and has been met with extensive human rights abuses by Iván Duque’s government as it attempts to crush the protests.

To date, police have killed at least 43 protesters, while they have also committed sexual violence, forced disappearances and torture against detainees.

Fórsa general secretary Kevin Callinan, and deputy general secretary Eoin Ronayne have both joined previous delegations to Colombia to see first-hand the challenges facing trade unionists there. They met online this week with the Irish ambassador in Bogota, Alison Milton.

This failure, and the abuses and violence on the part of sections of the state forces, are bringing the idea of Colombia as a democratic state into question.

Kevin commented: “I impressed upon the ambassador our serious concerns about the abuses of civil and human rights that have been taking place since the commencement of the strike in April.

“I also met with the Colombian ambassador to Ireland last week and said that we remain extremely concerned about how the right to associate, and the right to strike was being disregarded.

“This failure, and the abuses and violence on the part of sections of the state forces, are bringing the idea of Colombia as a democratic state into question,” he said.

Fórsa trade union has expressed its concerns over plans by An Garda Síochána to introduce mandatory drugs testing. The union
Read More
Next Article