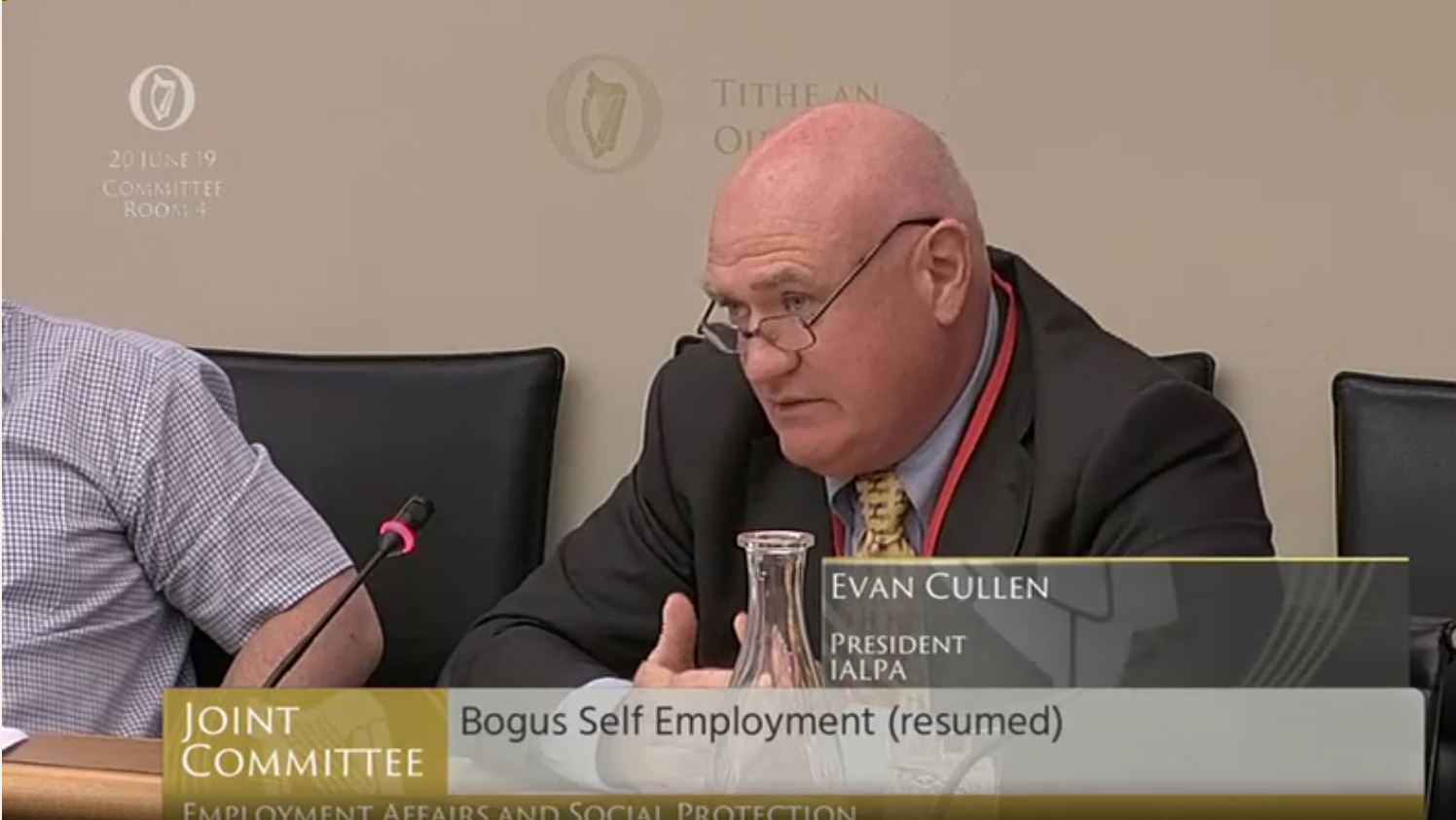 The Irish Airline Pilots Association (IALPA), a branch of Fórsa trade union, has told an Oireachtas committee that the Irish Revenue Commissioners and the Department of Employment Affairs and Social Protection need to approach their investigations into the status of Irish airlines’ contractor pilots “with the same focus and intensity as the authorities in Germany and the UK.”

The president of IALPA, Captain Evan Cullen (pictured), was addressing the joint Oireachtas Committee on Employment Affairs and Social Protection today (Thursday) in a hearing about bogus self-employment.

Captain Cullen told the committee that approximately half of pilots operating in Irish-registered airlines are not employed directly by the airline they fly for, which he said is “an extraordinarily high-level for such an important skilled and safety-critical profession.”

He said Ireland’s rate of ‘contractor’ pilots is far higher than the European average. Across Europe, 18% of pilots have non-permanent indirect employment status.

Approximately half of pilots operating in Irish-registered airlines are not employed directly by the airline they fly for.

He said: “In addition to the impact on individual pilots, and possible safety implications, the fact that in the region of 2,000 Irish-registered pilots are working as contractors means that the State loses out on the 10.85% Employers’ PRSI on those pilots’ salaries.”

Based on data published by the Department of Finance and the Department of Employment Affairs and Social Protection in 2018, IALPA conservatively estimates that this could cost the State around €15 to €16 million per year on an ongoing basis.

Captain Cullen described the typical structure of the employment arrangements for pilots affected by these arrangements. He said the offer of a contract to a pilot by an airline is subject to the pilot becoming a director and shareholder of a pre-existing limited company.

“The company will typically have between three and eight other directors, but the pilot will not be told who those directors are. The pilot will only be allowed to fly for one airline under this arrangement, which is usually put in place by an intermediary agency,” he said.

He said the majority of the pilots subjected to these Irish arrangements are not Irish nationals, do not speak English as a first language and do not live or work in Ireland.

He added that while the position of self-employed contractors appears to be legal under Irish law, different pieces of legislation may view these contracts in different ways should they prove not to comply with the law. “In such instances, the pilot could be subject to sanction for a contracting arrangement that was effectively foisted on them,” he said.

Captain Cullen told the committee that the Revenue Commissioners list a number of indicators of employee or contractor status. Irish contractor pilots only meet one of the 24 ‘contractor’ criteria, but they meet 23 of the ‘employee’ criteria.

“Based on this assessment, it is IALPA’s view that these contractor pilots are subjected to bogus self-employment and should be deemed to be employees and not self-employed contractors.

IALPA says these contractor pilots are subjected to bogus self-employment and should be deemed to be employees and not self-employed contractors.

“The actual working lives of contractor pilots subject to bogus self-employment arrangements do not vary in any meaningful detail from their employee pilot colleagues,” he said.

He added: “Young pilots are particularly affected by precarious employment terms, with almost 40% of such young pilots having no direct employment relationship with the operator they fly for, and the vast majority of the ‘contractor’ pilots in Ireland are also relatively young.”

Captain Cullen told the committee that the contracting arrangements in question can have several consequences, including:

He told the committee that legislative change was needed to ensure that the practice cannot continue.

These changes should be based on:

Captain Cullen outlined an example to the committee from 2011, when a German prosecutor asked the British authorities to search the UK premises of a company that provides pilot services to an Irish airline. The prosecutor alleged that the company in question was in breach of tax and social security law.

He said the German prosecutor stated that the agency in question was responsible for processing the monthly work performance for approximately 1,600 ostensibly self-employed pilots with the airline, through 300 Irish companies which had the legal form of a limited company.

“These companies were administered by accountancy firms specified on a list of ‘acceptable accountants’ that the pilots could engage with for the purpose of complying with the contract requirements. According to the German prosecutor, these companies may only serve to conceal an employment relationship with the airline,” he said.

A full copy of Captain Cullen’s presentation to the committee is available HERE.