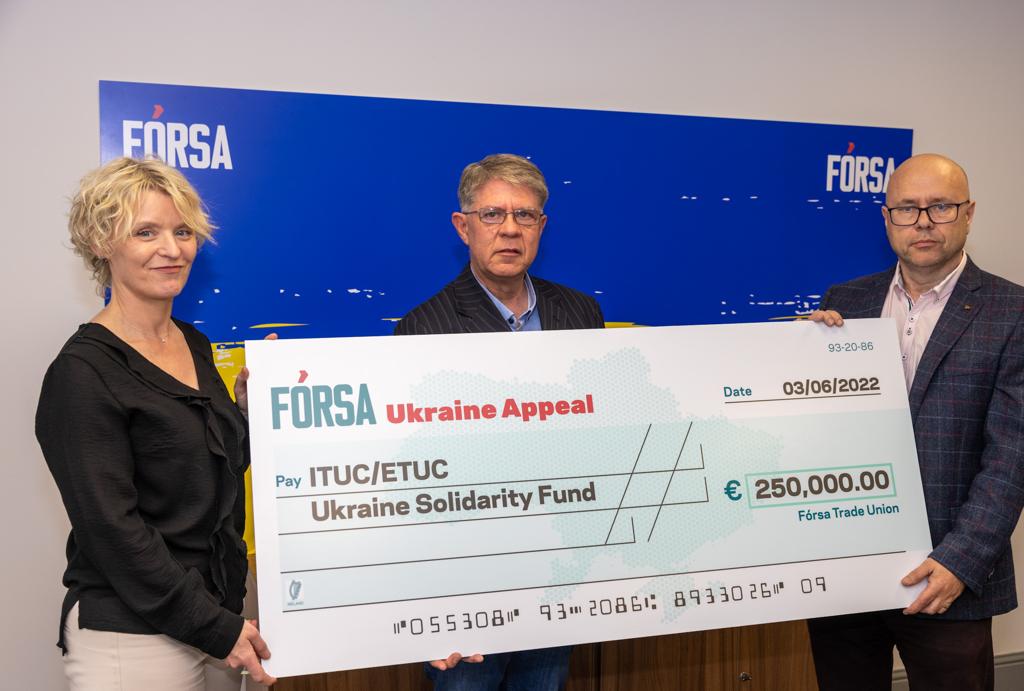 Fórsa today (Friday) presented cheques worth a total of half a million Euro (€500,000) to two organisations providing humanitarian relief to people displaced by Russia’s illegal invasion of Ukraine.

The union’s Ukraine Appeal raised almost €250,000 in donations from Fórsa members and branches. The Fórsa National Executive Committee then topped up the amount from the union’s Developing World Fund to bring the total raised to €500,000.

Almost 2,000 individual Fórsa members made contributions to the appeal, along with 98 of the union’s 200 branches.

The incredible response from Fórsa members echoes the generosity and support for the Ukrainian people coming from all walks of Irish society.

Fórsa general secretary Kevin Callinan said the appeal was established to provide a vehicle for union members and activists to express their solidarity through practical support. “The incredible response from Fórsa members echoes the generosity and support for the Ukrainian people coming from all walks of Irish society. It’s humbling to see such a magnificent display of solidarity from ordinary working people as we remember those who have died, those who are grieving, and those who have lost everything because of this terrible war and illegal invasion,” he said.

Irish Red Cross secretary general Liam O’Dwyer expressed his thanks to Fórsa for an “overwhelming support” of its Ukraine crisis appeal. “This tremendous contribution will directly assist our ongoing efforts to provide emergency assistance, both within Ukraine itself and in the neighbouring countries where more than 3,000,000 people have been forced to flee. The Fórsa aid will directly support the emergency provision of water, food, medical aid and treatment, and shelter,” he said.

ITUC general secretary Sharan Burrow said the ITUC/ETUC solidarity fund was supporting Ukrainian trade union humanitarian efforts on the ground. “The deep humanity of the men and women of Fórsa is demonstrated through their generosity in support of unions in Ukraine, who are providing refuge and essential supplies to those in need, and to unions in neighbouring countries who are providing support to Ukrainian refugees.”