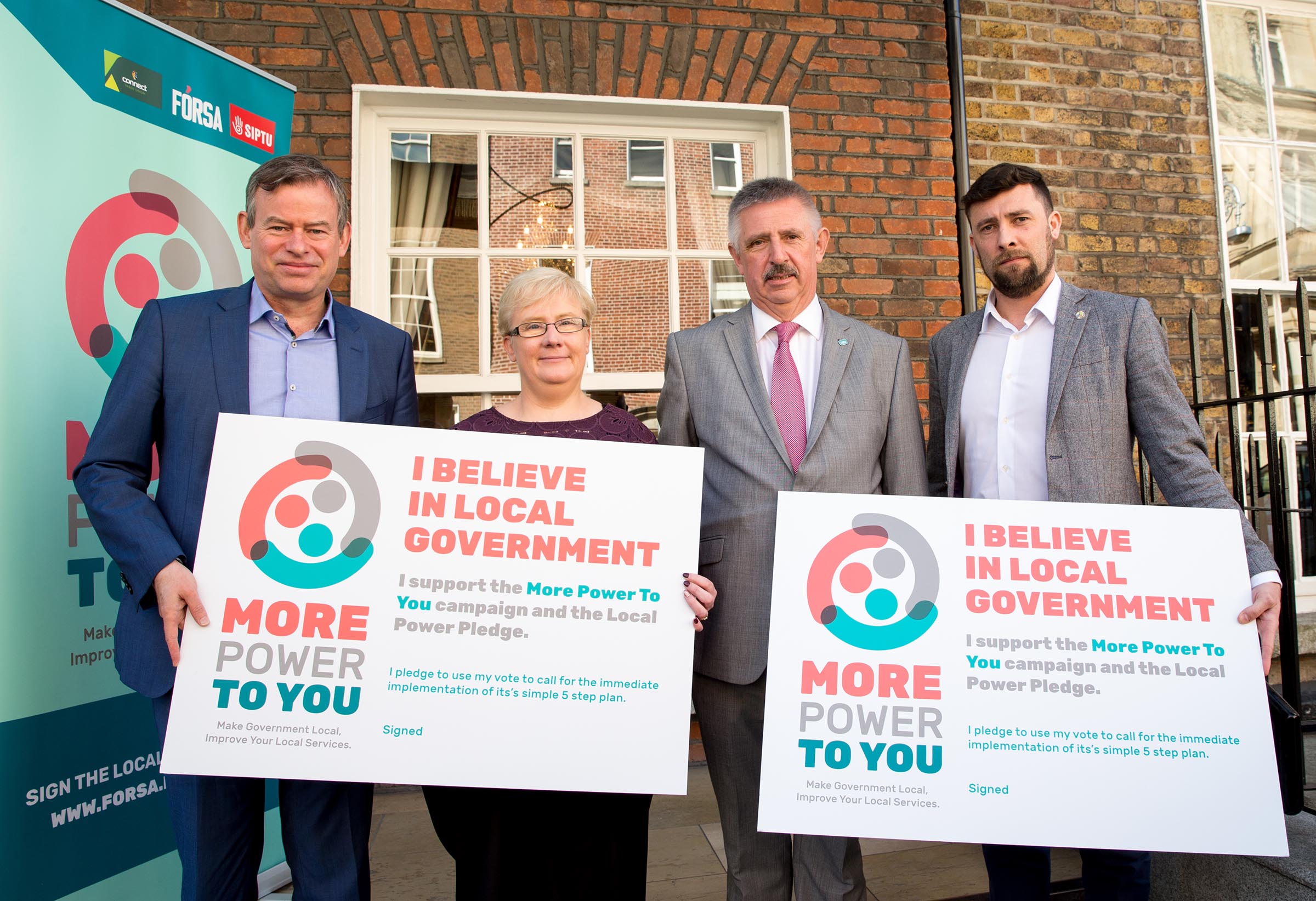 Trade unions representing over 30,000 local council workers today launched a campaign for substantially increased revenue and funding powers for local authorities, and published research that shows Irish councils have less autonomy from central government than their counterparts in 39 European countries. The ‘More Power To You’ campaign also calls for legislative changes to facilitate directly-elected mayors and restore and expand town councils, which were abolished in 2014.

The ‘More Power To You’ campaign also calls for legislative changes to facilitate directly-elected mayors and restore and expand town councils, which were abolished in 2014.

The research paper, Democracy Works If You Let It by Dr Mary Murphy of Maynooth University, finds that only 8% of Irish public spending occurs at local government level, compared to an EU23 average of over 23%, and that a quarter of the Irish spend is not fully under local authority control. And it says that, with just one city or county council for every 148,507 people, Ireland has far fewer local municipalities than similar-sized European countries.

The study says Irish local authorities perform fewer functions than municipalities across Europe, with their roles largely confined to physical infrastructure and environmental and recreational services. Democracy Works If You Let It claims this impacts negatively on local employment, service quality, value-for-money, environmental protection, and local jobs and economic development. It has also contributed to declining local election voter turnout.

The peer-reviewed research was commissioned by Fórsa, Siptu and Connect, who say local democracy has been eroded by:

The ‘More Power To You’ campaign is seeking commitments from political parties, and candidates in the upcoming council elections, on a range of local government reforms covering waste, water, housing, and energy services. These include:

Speaking at the launch, Dr Mary Murphy of Maynooth University said: “Local government can be an important source of economic development and local jobs, while local authorities across Europe are playing a leading role in transitioning to low-carbon renewable energy. We need to rebuild Irish local democracy and citizen participation to build strong local economies based on good jobs and decent incomes, and to address climate change.”

Fórsa National Secretary Peter Nolan said: “Irish people take great pride in their counties and cities, yet this element of our democracy has been systematically eroded by centralisation, privatisation and austerity. People in Ireland deserve structures and systems that deliver quality local services that match the best in Europe. We’re calling on political parties and local council candidates to join us in a campaign to achieve that.”

Local government can be an important source of economic development and local jobs, while local authorities across Europe are playing a leading role in transitioning to low-carbon renewable energy.

Siptu Division Organiser Adrian Kane said: “All over Europe, privatised local services are being brought back under direct local authority provision because publicly-provided services are usually better quality, better value for money , and more environmentally sustainable. The ‘More Power to You’ campaign is about bringing power closer to the people, and creating decent local employment through the direct provision of local authority services. It’s time to reform Irish local government to reflect the EU principle of subsidiarity.”

Connect public sector official Derek Kelleher said: “As the largest craft union in Ireland, Connect believes we have the members with the knowledge and skills to take back control of these vital services, which would provide quality and quantity faster than any private sector providers.”

More Power To You campaign page.

Download the full report: Democracy Works If You Let It