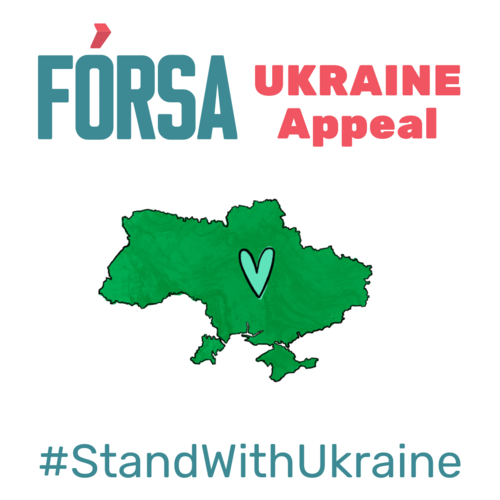 Fórsa is to give half a million Euro (€500,000) to two organisations providing humanitarian relief to people who’ve been displaced by Russia’s illegal invasion of Ukraine.

Established three weeks ago today (Wednesday), the union’s Ukraine Appeal raised almost €250,000 in donations from Fórsa members and branches. Fórsa’s National Executive Committee met this morning and decided to top up the amount from the union’s Developing World Fund to bring the total raised to €500,000.

The Fórsa appeal set a donation target of €50,000 when it was established earlier this month. But the union repeatedly increased the target as the solidarity and generosity of its members and branches exceeded expectations. Almost 2,000 individual Fórsa members have made contributions, along with 98 of the union’s 200 branches.

The incredible response from Fórsa members echoes the generosity and support for the Ukrainian people coming from all walks of Irish society.

Fórsa general secretary Kevin Callinan said the appeal was established to provide a vehicle for union members and activists to express their solidarity through practical support. “The incredible response from Fórsa members echoes the generosity and support for the Ukrainian people coming from all walks of Irish society. It’s humbling to see such a magnificent display of solidarity from ordinary working people as we remember those who have died, those who are grieving, and those who have lost everything because of this terrible war and illegal invasion,” he said.

Mr Callinan will be among the keynote speakers at an ICTU solidarity protest, which will mark the first month of the Russian invasion of Ukraine outside the Russian Embassy at 5.00pm tomorrow (Thursday 24th March). He will be joined by Larysa Gerasko, the Ukrainian Ambassador to Ireland.

Irish Red Cross secretary general Liam O’Dwyer expressed his thanks to Fórsa for an “overwhelming support” of its Ukraine crisis appeal. “This tremendous contribution will directly assist our ongoing efforts to provide emergency assistance, both within Ukraine itself and in the neighbouring countries where more than 3,000,000 people have been forced to flee. The Fórsa aid will directly support the emergency provision of water, food, medical aid and treatment, and shelter,” he said.

The Fórsa aid will directly support the emergency provision of water, food, medical aid and treatment, and shelter.

Irishwoman Esther Lynch, who is deputy general secretary of the ETUC, said the solidarity shown by Fórsa members will make a real difference to the men, women and children of Ukraine. “I am proud of the support that Irish workers and their families are extending to Ukraine in its darkest hour. Global solidarity is a cornerstone of international labour movement values and, by supporting the people of Ukraine, Fórsa is following in the great tradition of the Irish trade unions,” she said.

ITUC general secretary Sharan Burrow said the ITUC/ETUC solidarity fund was supporting Ukrainian trade union humanitarian efforts on the ground. “The deep humanity of the men and women of Fórsa is demonstrated through their generosity in support of unions in Ukraine, who are providing refuge and essential supplies to those in need, and to unions in neighbouring countries who are providing support to Ukrainian refugees.”

Fórsa’s honorary treasurer Kevin O’Malley said the union was grateful to branches for their wonderful contributions and praised union members for their generosity. He said the union’s Developing World Fund provided ongoing support to education , development and human rights projects across the globe. “Funded by 3% of every member’s union subscription, the Fórsa Developing World Fund gives over €600,000 a year to projects around the world. This expression of solidarity means we can make ongoing contributions to human rights and development, as well as responding to humanitarian emergencies in Ukraine and elsewhere,” he said.

The School Completion Programme (SCP) marked 20 years of service, to young people at risk of early school leaving, at
Read More
Next Article