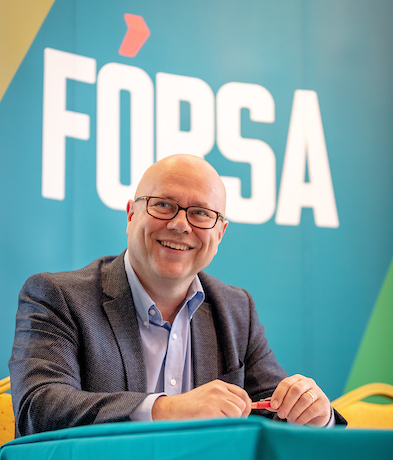 Fórsa General Secretary Kevin Callinan has said that a reestablishment of social dialogue, bringing together government, unions and employers, could resolve or improve issues where the government has failed, including childcare, education and housing.

Mr Callinan made the remarks today (Wednesday) during a speech to SIPTU’s national conference which is taking place in Cork. He was addressing delegates on union concerns over growing inequality in Irish society, and the absence of the ‘balancing’ influence that social partnership provided up to its collapse in 2009.

He told delegates: “In the early years of social partnership the 1990 Industrial Relations Act became law resulting in a huge reduction in strike days. The legislation tilted the balance towards employers but the existence of the institution of social partnership provided a measure of redress to unions and their members.

Mr Callinan emphasised that he did not regard the old model of social partnership as entirely successful, and remains critical of its deficits as well as what he called ‘missed opportunities’ by unions: “Whatever its failings, and there were many, social partnership provided a mechanism to engage in genuine social dialogue with the aim of crafting policy solutions to national problems,” he said.

Mr Callinan cited remarks made by IBEC CEO Danny McCoy at the Department of Business, Enterprise and Innovation’s conference to mark the ILO centenary in September. “He delivered a devastating critique of Irish infrastructural capacity while making the case for genuine social dialogue.

“Albeit couched in a concern for long-term national competitiveness, he highlighted a range of failings including the decline in the standing of our universities, the exorbitant cost of childcare, the excessive commutes for so many and the absence of effective solutions to the housing crisis.

I put it to you that real social dialogue just might resolve, or at least improve, these issues where government has failed,” he said.

A copy of Mr Callinan’s full speech to the SIPTU conference is available HERE.

Mr Callinan told SIPTU delegates that the emergence of calls for the repeal of the Industrial Relations Act was not surprising as many employers continue to develop employment practices that stretch the limits of what the law permits.

“Some employers have no compunction in using their ample resources to run to the courts to impede unions and workers from invoking the right to strike in what effectively becomes a test of the respective financial position of both parties – one that no union can win.

“When the latter scenario becomes reality it is time for decisive action to restore fairness to the relationship between capital and labour,” he said.

Mr Callinan said trade unions will not be silent on the issue: “The law must be changed to ensure not just the right to organise but the right to bargain effectively. Otherwise it will have no credibility and little acceptance,” he said.

Mr Callinan told delegates that unions needed to be relevant, empathetic and visible both to their members and to wider society, and that the current project by Congress to create local trade union centres was part of the effort to achieve this: “We must be connected to the concerns of workers and their local communities; we must be on their side; and we must be available to them,” he said.

A new sustainability policy, outlining actions the union is taking to reduce its impact on the environment can be found
Read More