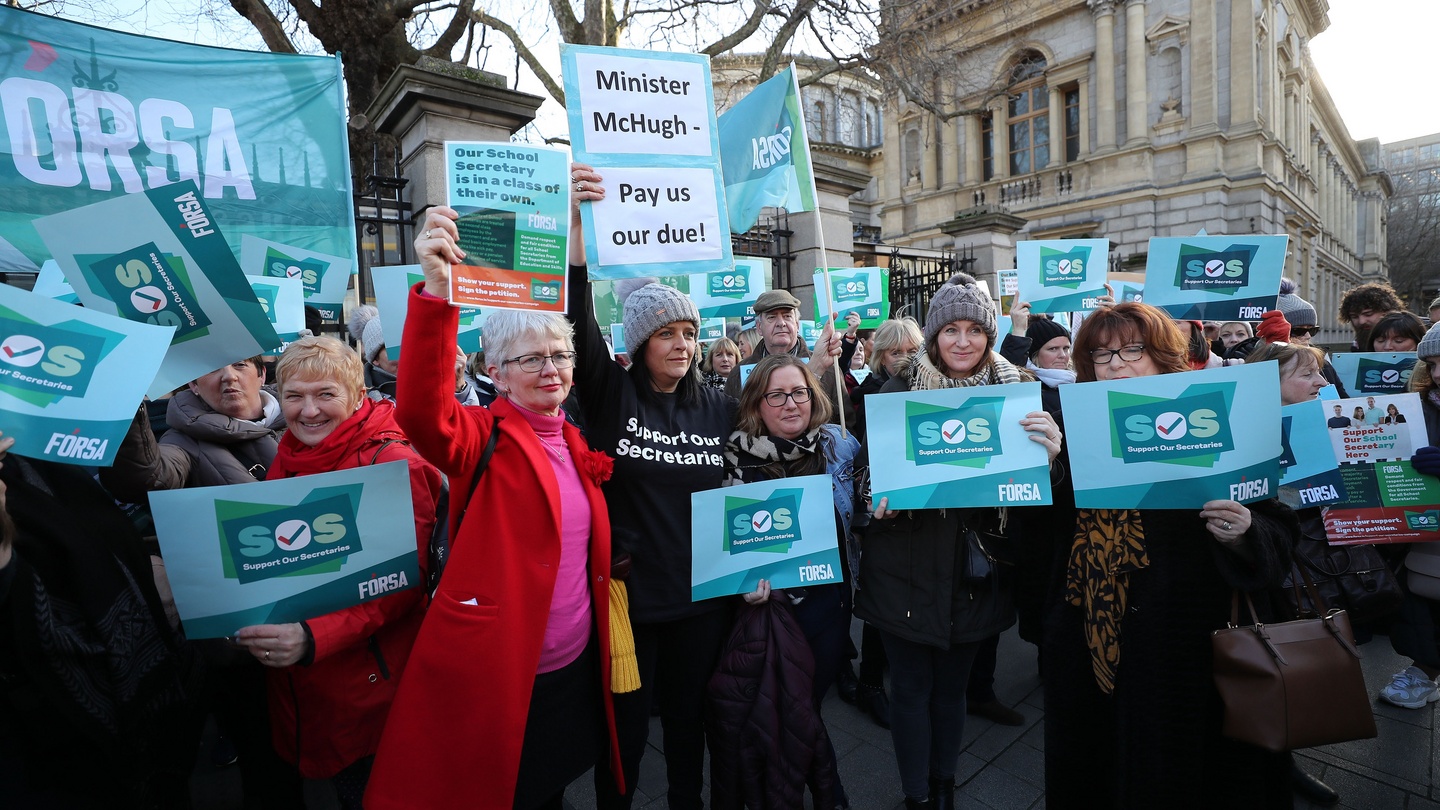 A national one-day strike by school secretaries and caretakers, scheduled for tomorrow (Wednesday) has been deferred after the education department made significant concessions in a Workplace Relations Commission-brokered negotiation yesterday.

Their union Fórsa says the department finally conceded that all school secretaries should be placed on the public service clerical officer scale, bringing an end a four-decade old two-tier pay system. The offer will also do away with the requirement for most secretaries to sign on during school breaks, as they will be able to retain existing work patterns while having their salaries paid over 52 weeks on a pro-rata basis.

The assimilation arrangements for transferring staff to new scales are to be finalised through discussions over the next two weeks.

The improvements, which will come into effect from 1st September 2021, will also see equalisation of annual leave arrangements on the basis of public service clerical officer provisions. The education department also agreed to improve sick pay arrangements, though Fórsa says it is still pursuing full equalisation with ETB-employed secretaries.

The union said it expected the new employment conditions to be included in a model national contract for secretaries.

The union also said it expected the new employment conditions to be included in a model national contract for secretaries. It said the education department had stated that the administration of secretaries’ pay would be centralised, with the details to be discussed over the coming weeks.

Fórsa said work remained to be done on the details of a similar package for caretakers, but said the department had agreed that the same principles would apply to them.

Whilst no agreement was reached on the provision of pensions, the parties will try and seek a resolution of this outstanding issue in the final phase of talks on this long-standing dispute.

The determination and resolve of school secretaries and caretakers has finally put the end of the two-tier pay system within our grasp.

Fórsa’s head of education Andy Pike said the outcome represented a major victory for school secretaries after a decades-long campaign. He added, until yesterday, an unacceptable offer from the education department would still have left most secretaries on €12,000 a year less than their directly-employed colleagues.

“The determination and resolve of school secretaries and caretakers has finally put the end of the two-tier pay system within our grasp. No secretary or caretaker wanted to be on strike tomorrow, but their willingness to take that step in a just cause was crucial to this victory. On their behalf, I want to thank the thousands of parents, SNAs, teachers, principals, elected representatives and others who have shown growing support and solidarity for secretaries and caretakers, who are at the heart of the school community,” he said.

Yesterday evening, the Fórsa branch committee agreed to defer the strike action for two weeks, pending confirmation of the implementation of the package. The union is updating members in Zoom meetings later today.

Caretakers and school secretaries to strike this week

Fórsa today (Friday) said it is far too early to relax Covid test and tracing protocols in schools. The union
Read More