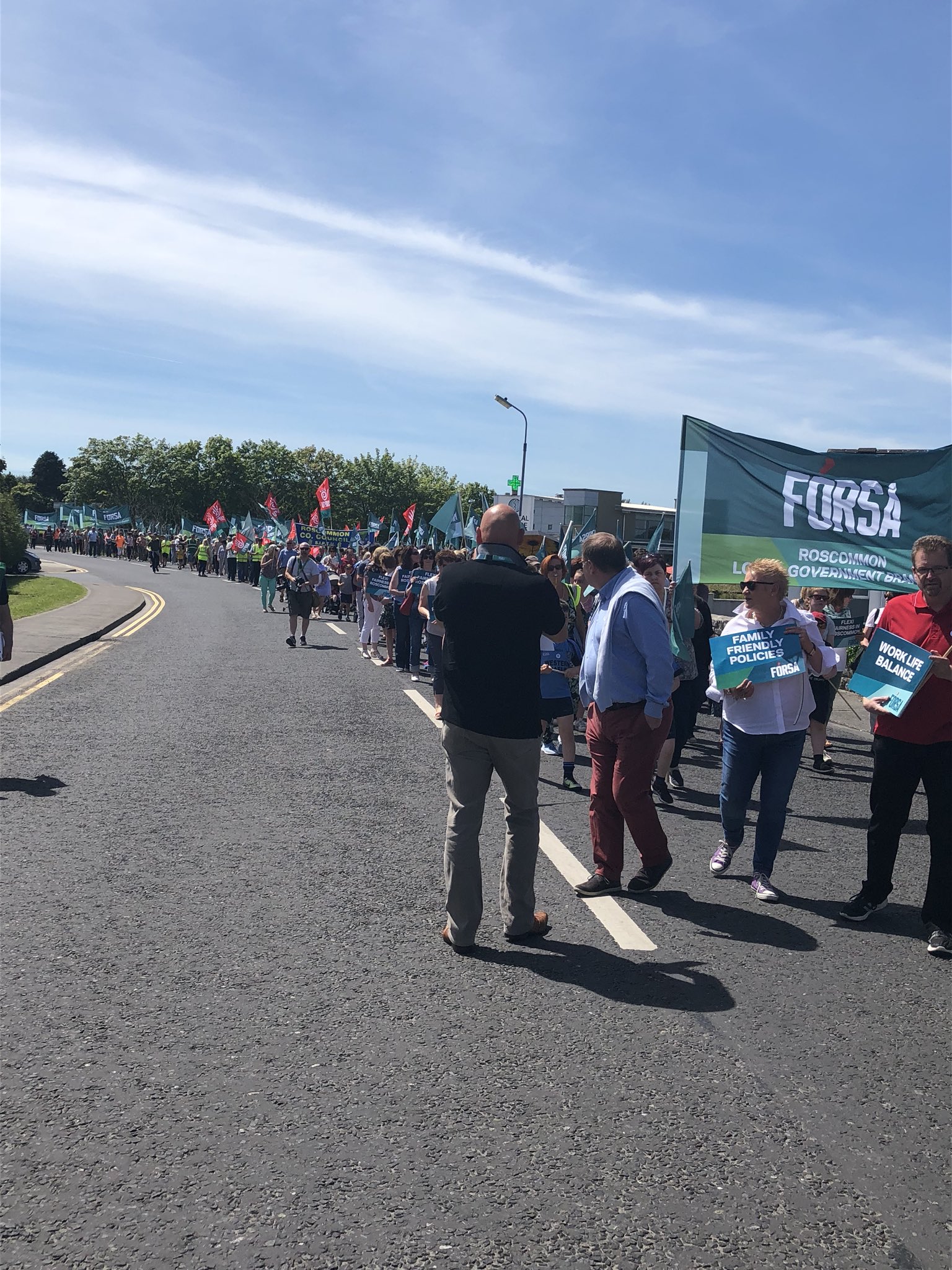 The President of Ireland’s largest public service union today (Saturday) accused Roscommon County Council of wasting resources in a “needless and ‘bloody-minded” crusade against flexibility in the delivery of public services.

Speaking at a rally in Roscommon town, Fórsa leader Ann McGee said flexibility over working time worked in the interests of local government services and service-users, just as it does for the staff who provide them.

“This is a bit of labour history that nobody wanted to make” Fórsa president, Ann McGee referring to Fórsa’s first ever strike which took place at Roscommon County Council last Thursday. pic.twitter.com/doBQ5WqVGK

“You have been forced into a strike by an intransigent employer, who is willing to waste council resources – the community’s resources – in a needless, bloody-minded, and mean-minded crusade. I’m here today to say that Fórsa is fully behind you,” she said.

You have been forced into a strike by an intransigent employer, who is willing to waste council resources – the community’s resources - in a needless, bloody-minded, and mean-minded crusade.

The event saw Fórsa branches from across the country rally in support of Roscommon council workers who are taking strike action over council management’s refusal to implement a flexi-leave scheme in the local authority.

Ms McGee said the dispute had provoked the first ever strike by Fórsa, which was formed through an amalgamation of three unions in January 2018. “This is a bit of labour history that nobody wanted to make. We are public servants who care deeply about the services we provide in our local communities, and none of us contemplate strike action lightly. But equally, we have a responsibility to stand up against injustice – and to protect and defend workers’ rights, which have been hard-won by previous generations,” she said.

Fórsa’s head of local government Peter Nolan rejected council claims that Roscommon staff were seeking extra leave. “Flexi-leave schemes in hundreds of public and private sector workplaces provide flexibility for employers and staff alike. Council management’s claim that its staff are seeking extra leave is wide of the mark because, under these schemes, nobody can take a minute off unless they have already worked up the extra time,” he said.

The union also rejected management claims that flexi-schemes allowed staff to determine when they took leave. “We have no issue with line managers sanctioning flexi-time. This is normal practice. What is abnormal is Roscommon council’s refusal to allow any flexibility over working time at all,” said Mr Nolan.

Roscommon council workers staged a one-day strike last Thursday (21st June) and have scheduled one-day strikes every Tuesday and Thursday from now on.

Roscommon council workers have scheduled one-day strikes every Tuesday and Thursday from now on.

Fórsa official Padraig Mulligan said management had not budged in seven Workplace Relations Commission hearings on the matter. “We really have explored every avenue to avoid industrial action. Now we need the support of Fórsa branches as we embark on a campaign of one-day strikes,” he said.

The Labour Court last year confirmed that Roscommon council staff should have the same rights as their colleagues throughout the local government sector. Its recommendation, which was binding on both sides, pointed to the Haddington Road agreement’s provisions on flexi-leave, which say: “no change is proposed to the existing terms with regard to the amount or the use of hours to be carried over.” That protection carried into the current Public Service Stability Agreement (PSSA).

Mr Mulligan said management’s intransigence, which is unprecedented in Irish local government and across the public service, was an attack on working parents, particularly working mums. “No other local authority in Ireland has attacked working parents – and particularly working mothers – in this way. It is unprecedented within the public service, and it hits lower-paid women hardest as many of them depend on the flexi scheme to balance work and caring responsibilities,” he said.

The crowd is growing here in Roscommon as we prepare to march through the town in solidarity with Roscommon County Council workers who are being denied their right to flexi-leave. pic.twitter.com/HMU5ZYSekr

Fórsa members commenced strike action yesterday at Roscommon County Council, and the union is calling upon branches throughout the country
Read More
Next Article