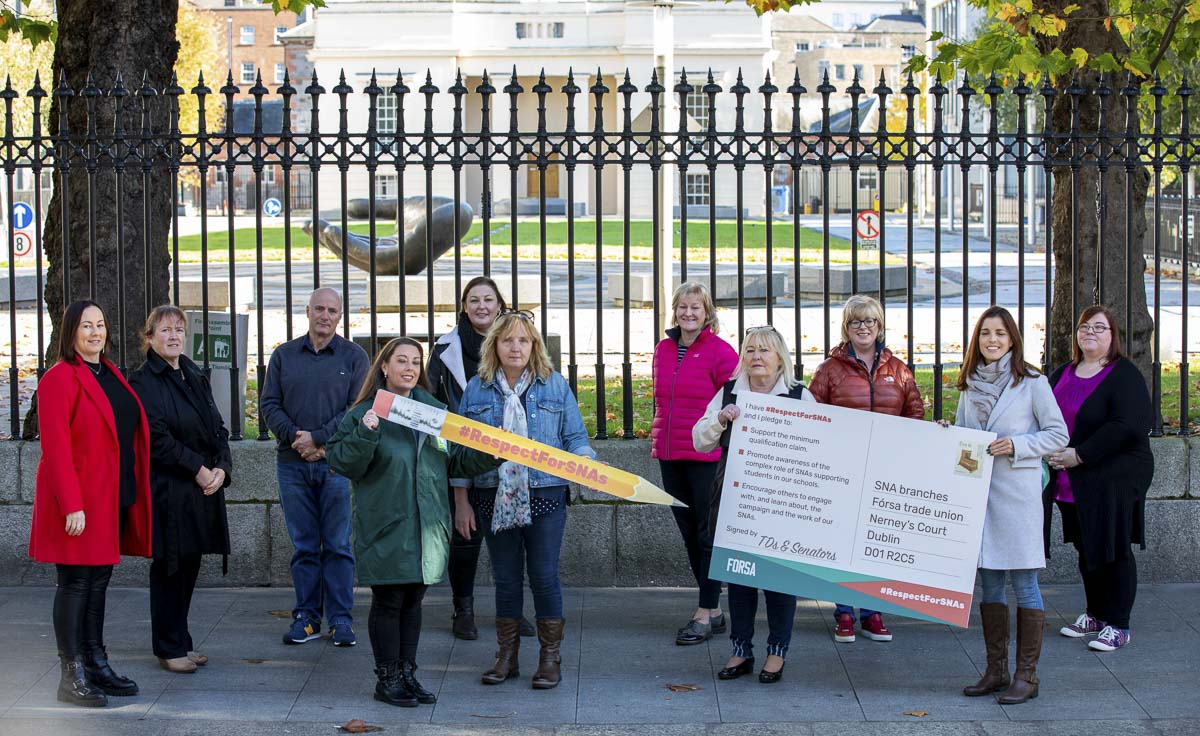 Fórsa has today (Thursday) launched the second phase of its national campaign to highlight the value of the role of special needs assistants (SNAs), following the Department of Education’s rejection of the union’s claim for a new minimum qualification during the summer.

The latest phase of the campaign will see the union’s 12,000 SNA members contacting all TDs and senators in the coming weeks to support Fórsa’s call for a review of the minimum essential qualification for SNAs and to promote greater awareness of their complex role.

TDs and senators will also be asked to endorse the campaign by signing a pledge ahead of an Oireachtas briefing session in Leinster House which will take place on 8th December.

Our members are ready now to take the discussion to their local TDs.

The union’s head of Education Andy Pike said the outdated requirement for just three ‘D’ passes in the Junior Certificate lies at the heart of the problem: “Our SNAs are not being respected or recognised as skilled and committed staff in the Irish education sector, and this campaign has been designed to change that, to give the professional recognition and respect to SNAs that they deserve, and to modernise the qualification requirements for this skilled and invaluable service,” he said.

The current standard minimum qualification for an SNA is three Ds in the Junior Cert. @forsa_union_ie have launched a campaign, #Respect4SNAs, to try change that.

Mr Pike said establishing a more professional qualification, at QQI Level 6, would increase the standing of SNAs within in the school system and secure proper recognition for their work, as well as acknowledging that many SNAs already hold qualifications at degree level, while most have achieved at least a level six qualification.

“The Department of Education is essentially ignoring the lived reality of the SNAs in its employment, and remains out of step with international standards. Many other countries require candidates for SNA posts to have a college diploma or level six equivalent qualification.

The SNA qualification has not been altered since the statutory SNA scheme was first established in 1979, Ireland is out of step with many other countries on this arrangement.

“Our members are ready now to take the discussion to their local TDs, and to senators, and make them aware of this anomaly. They will appeal to them directly to support the case for updating the minimum qualification standards,” he said.

The SNA qualification has not been altered since the statutory SNA scheme was first established in 1979, and Mr Pike said the union wants it replaced with the relevant QQI qualification because the service provided by SNAs has changed considerably since its establishment.

Required SNA qual is still 3 D grade passes in the old junior cert. Hasn’t changed since 1979 but the role of the SNA has changed. Time to change the qualification to QQI level 6 and start to recognise and respect the role of SNAs#Respect4SNAs https://t.co/jrCgTuAWUW

Fórsa met with department officials at the Workplace Relations Commission (WRC) in April this year to advance the union’s claim. Fórsa said many schools already seek a level six qualification, and don’t appoint new SNAs unless they already hold a level five award. In a letter sent to the union in July, the department said there was no need to change the qualification.

The #RespectforSNAs campaign, to establish a new entrant qualification that reflects the complexities of the role, was launched in July 2021, and has drawn support and endorsements from parents associations, boards of management, school principals, teaching unions, advocacy groups and other stakeholders. Fórsa will also host an online conference on 4th December on the issue, with contributions from the National Council for Special Education (NCSE), academic experts, parents groups and SNAs on how education and training for SNAs could be improved.

Fórsa and other health unions have urged the HSE to prioritise healthcare workers for a booster vaccine, amid reports that
Read More
Next Article