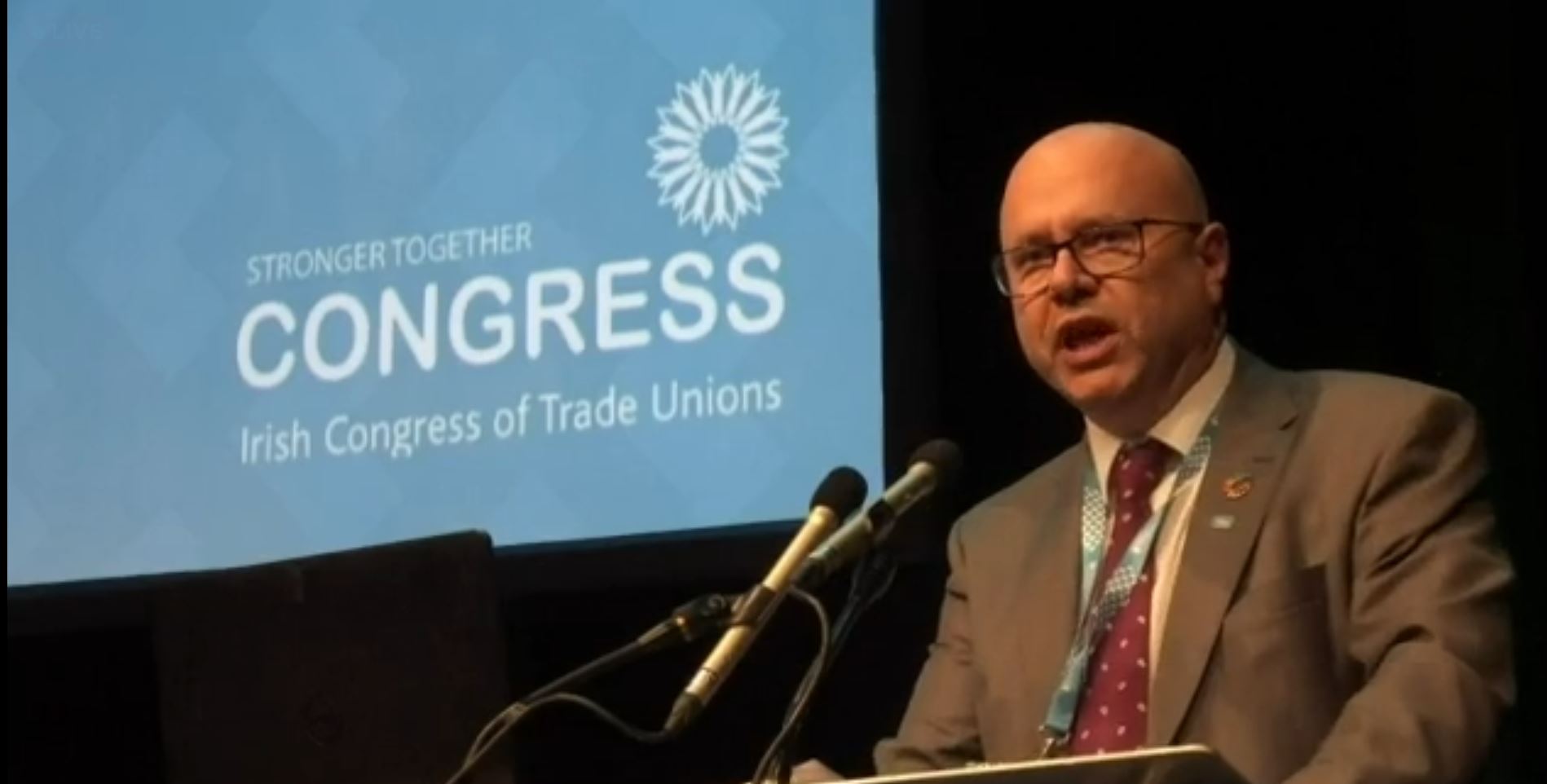 The incoming president of the Irish Congress of Trade Unions (ICTU) today (Tuesday) called for an expansion of employer PRSI contributions, taxes on wealth, and “meaningful financial deterrence for environmentally-damaging activities.” He said this would provide adequate funding to provide “decent public services worthy of a wealthy European nation.”

Speaking at the ICTU biennial conference in Belfast, Kevin Callinan said employer social contributions in both jurisdictions on the island of Ireland were way below the norm in other advanced European nations. This accounted for the shortfall in investment in public services, he said. He added that the tax burden fell too heavily on incomes, rather than wealth.

Conference delegates backed the ICTU ‘No Going Back’ programme, which sets out a practical blueprint for embedding these principles into Ireland’s economic and social model.

Kevin, who is Fórsa’s general secretary, was elected as ICTU President at the conference. It is a two-year term, which he will serve alongside his role as general secretary of Ireland’s largest public service union.

He told delegates that ICTU’s ‘No Going Back’ programme set out a vision for a “high skills, high productivity” post-Covid economy that provides secure well-paid work, a “European-standard social wage,” decent pensions and a strong safety net for those unable to work.

“Right now we spend far less on public services and infrastructure than similar European countries. Almost €3,500 less per person each year in the Republic, a total of over €17 billion in 2019 alone. The entire public spending gap between Ireland and its nearest EU neighbours matches, almost exactly, the shortfall in employer social contributions.

“That’s why our vision of decent public services, worthy of a wealthy European nation, would be funded by an expansion of employer contributions, increased tax on wealth rather than just incomes, and meaningful financial deterrence for environmentally-damaging activities,” he said.

Kevin said the pandemic had put past failures and future possibilities into sharp relief.

“Underfunded and disrespected for decades, the structural weaknesses of our public services, north and south, were laid bare for all to see. What passed as worker protections on this island – the weakest among the wealthier societies of Europe – exposed the insecurities that are the daily reality for hundreds of thousands of workers. And the vulnerabilities of our low-tax, light touch, fiscal and regulatory regimes left us exposed to a massive external shock for the second time in little more than a decade,” he said.

But workers, communities and public services had stepped up to the challenge and governments had little choice but to step up too.

“Their response contrasted sharply with the earlier banking crisis, when they quickly ducked behind the devastating and divisive economics of austerity. This time, strong support for a State-led response to the massive public health and economic challenges emerged on this island and beyond.

“We saw what can be achieved when the State mobilises financial, organisational and human resources for the common good, when people work together collectively, and when citizens have access to essential goods and services,” he said.

No Going Back outlines how can recover and rebuild an economy based on decent, secure well-paid work.

Conference delegates backed the ICTU ‘No Going Back’ programme, which sets out a practical blueprint for embedding these principles into Ireland’s economic and social model.

Kevin  said: “No Going Back outlines how can recover and rebuild an economy based on decent, secure well-paid work. A high-productivity, high-skills economy, supported by investment in education, childcare and infrastructure. An economy where all workers earn at least a living wage, and enjoy a European-standard social wage with robust social solidarity based on decent pensions and a strong safety net for those unable to work.”

He said the programme also planned for a sustainable society, “where workers and communities are heard and heeded through robust social dialogue, and where action to secure the future of our planet – through a just transition – trumps the pursuit of private profits for vested interests.”

Fórsa has welcomed the Government’s decision to maintain its existing policy of a staggered and phased return to workplaces, instead
Read More
Next Article