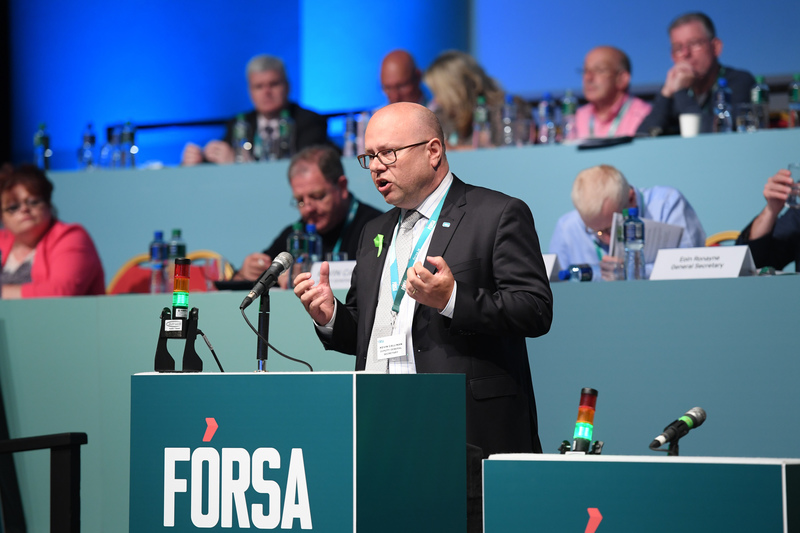 Fórsa deputy general secretary Kevin Callinan told conference delegates in Killarney today (Thursday) that the political system has failed to display a real sense of urgency when it comes addressing the needs of people experiencing or living under the threat of homelessness.

Kevin was speaking on a motion from the union’s national executive which calls for a range of emergency and constitutional measures to address the housing crisis.

Kevin contrasted the political response to measures introduced to deal with last month’s fodder crisis. “Year after year now, we await the same sense of urgency on the part of our politicians when it comes to citizens experiencing or living under the threat of homelessness – our fellow human beings,” he said.

The conference motion reflects the demands contained in the Irish Congress of Trade Unions’ Charter for Housing Rights, launched earlier this year.

What’s the use of liberty and equality without the fraternity or social solidarity to go with it?

Kevin said the issue goes right to the heart of the idea of the Irish Republic. “What’s the use of liberty and equality without the fraternity or social solidarity to go with it?” and said this is why a constitutional referendum to affirm the right to housing was needed.

Kevin said the founders of the State “possessed the necessary moral integrity, sense of purpose and strength of will to tackle even greater housing challenges when we were a foundling State alone in the world reliant solely on our own resources.

“In the cities slums were cleared and massive building programmes commenced that ensured local authority housing could be made available in practically every town, village and hamlet.

“This, in turn, ensured some level of affordability in the private housing market so that those on modest incomes could aspire to own their own home, in circumstances suitable for them to raise a family,” he said.

Kevin said many Fórsa colleagues and their family members are now unable to buy their first home, and struggle with excessive and rising rents, insecure tenancies and the spectre of eviction.

These concerns fade into relative insignificance when we witness the obscene consequences of homelessness – inadequate and inappropriate living arrangements, rough sleeping, people dying on our streets.

He said all of these factors motivated the union’s involvement in the Secure Rents campaign in late 2016.

“These concerns fade into relative insignificance when we witness the obscene consequences of homelessness – inadequate and inappropriate living arrangements, rough sleeping, people dying on our streets.

“It’s not as if the problem wasn’t foreseen – as far back as 1974 the Kenny report recognised the significance of land use policy as the key lever. It’s past time that this most basic natural resource – land – is made work for the citizen – and not the speculators, the hoarders and the profiteers,“ he said.

Kevin said Fórsa is proud to support the National Homeless and Housing Coalition and to promote the Congress Charter, and that the union will continue to work with a broad coalition to produce the political consensus necessary to end the crisis once and for all.

Brexit threat to jobs and incomes

Fórsa has renewed its commitment to tackle threats to jobs and living standards arising from Brexit. The union’s national conference
Read More