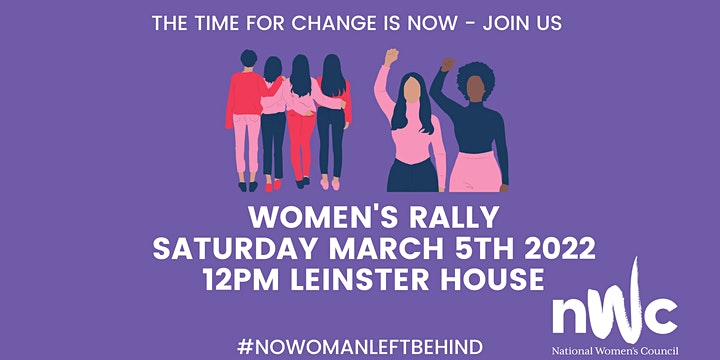 Fórsa is supporting the #NoWomanLeftBehind Dublin rally, which will mark International Women’s Day.

Organised by the National Women’s Council (NWC) the rally will take place outside the Kildare Street entrance of Dáil Éireann at 12 noon on Saturday 5th March.

It will call for political leadership and action on women’s equality, and for an end to violence against women.

Other demands of the NWCI rally include a reformed healthcare system with women at its centre, greater female representation when decisions affecting women’s lives are made, and access to quality public services including childcare and housing.

There will be safe seating for people with mobility issues at the front of the rally. Spaces are limited so if you would like to reserve a seat, please contact NWC’s access officer for the event at susanmcc@nwci.ie or at 087-097-6608.

Fórsa is encouraging all members who can to attend the event and demand positive change this International Women’s Day.

To mark International Women’s Day, the ICTU Women’s Committee is also set to hold a lunchtime webinar to examine practical ways trade unions can use the ILO Convention 190 on the elimination of violence and harassment, and how unions are developing policies to support victims of domestic abuse as well as supporting members who have experienced sexual harassment. Find out more here.

It’s just five days since we launched our appeal, and Fórsa members and branches have already donated an incredible €52,000
Read More