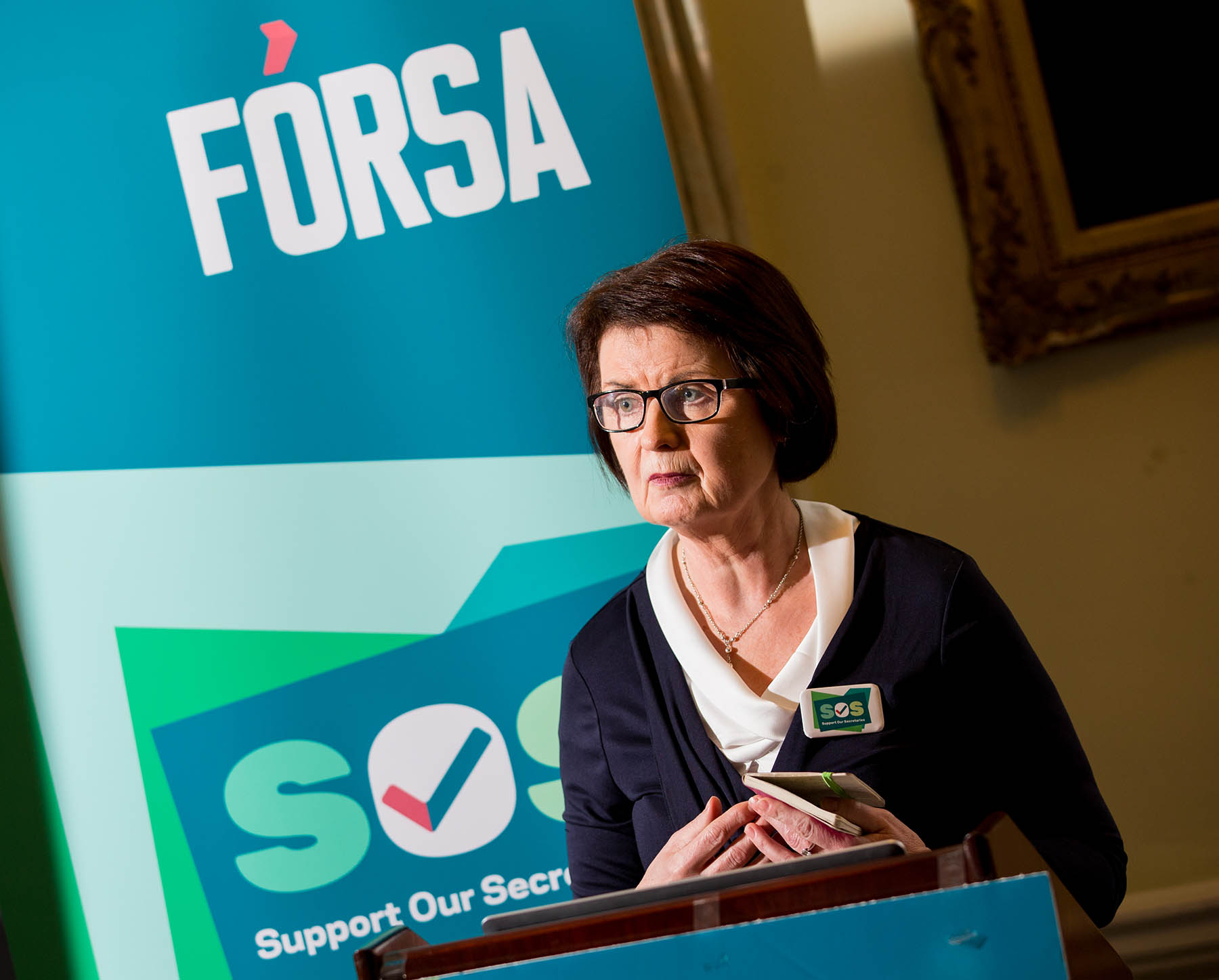 “When I retire I won’t have an occupational pension, meaning my current income will almost half. I’m concerned that if I become ill I’d find it nearly impossible to pay the healthcare costs associated with that.” – Kathleen O’Doherty, school secretary (pictured).

Ireland’s largest public service union, Fórsa, has today (Thursday) launched a campaign seeking fair treatment for school secretaries. The union said that the current pay model in place for the vast majority of school secretaries means that they are being treated like second class employees by the Government.

The campaign, Support Our Secretaries, is seeking respect and fair conditions for all school secretaries, and has the backing of the primary school teacher’s union, the INTO, whose general secretary Sheila Nunan addressed today’s campaign launch in Dublin.

The campaign is also backed by the two main secondary teachers’ unions, the ASTI and TUI.

Fórsa lead organiser Joe O’Connor said the union estimates that 90 per cent of school secretaries are paid through their school’s ancillary grant – leaving some with salaries as low as €12,000 a year.

The campaign, Support Our Secretaries, is seeking respect and fair conditions for all school secretaries. There are school secretaries who have served their community for 20 or 30 years but who will retire into poverty without any occupational pension at all.

“There are approximately 3,500 school secretaries working in our education system. Roughly ten per cent of those are paid directly by the Department of Education and Skills, on salaries varying between €24,000 and €44,711 a year.

“The rest – the vast majority – are subject to a system which means their pay is determined by individual school boards of management. This has led, in the most extreme cases we’ve encountered, to school secretaries earning as little as €12,700, with no entitlement to benefits such as sick pay or pension rights,” he said.

The two-tier secretarial pay system was created almost 40 years ago. School secretaries employed before 1982 were employed directly by the Department of Education. In some schools the union has found secretaries working side by side under the two different payment models.

Mr O’Connor said: “There are school secretaries who have served their community for 20 or 30 years but who will retire into poverty without any occupational pension at all.”

Fórsa’s senior general secretary designate Kevin Callinan said the time had come to address the issue. “The fundamental lack of respect is unjust, impractical and unsustainable.

The fundamental lack of respect is unjust, impractical and unsustainable. Fórsa is calling on the Department of Education and Skills to implement measures to treat all school secretaries with fairness and respect.

“The time has come to end this arbitrary, unfair and unjust system. Fórsa is calling on the Department of Education and Skills to implement measures to treat all school secretaries with fairness and respect,” he said.

Mr Callinan said school secretaries should be provided with the same basic entitlements and protections equivalent to clerical staff on public service pay scales. He said this would reflect the workload and responsibilities taken on by every school secretary in the country.

INTO general secretary Sheila Nunan said the arrangements by which most school secretaries are employed are unacceptable. “The precarious nature of the work, and the lack of access to sick pay and proper pension provision are deeply unfair. INTO supports the call by Fórsa that all school secretaries be placed on a salary at the appropriate public service grade,” she said.

The Fórsa campaign will lobby TDs and Senators to back a new payment model for school secretaries. The union has been preparing for several months by engaging in talks with a wide range of public representatives.The campaign includes information packs that will be sent out to all school principals and school secretaries, seeking support for the campaign through an online petition, and the recruitment of more school secretaries to membership of the union.

Mr O’Connor added: “The first and most important step of this campaign is for school secretaries to stand together. They are the key to everything that happens in our schools. The school secretary looks after every appointment, every schedule, every crisis, every teacher and every parent, every single day.

“They are commonly the longest serving, the most trusted and an indispensable member of staff. Yet they are also the most neglected under the current model of employment. This must change,” he said.

The reality of life as a school secretary.