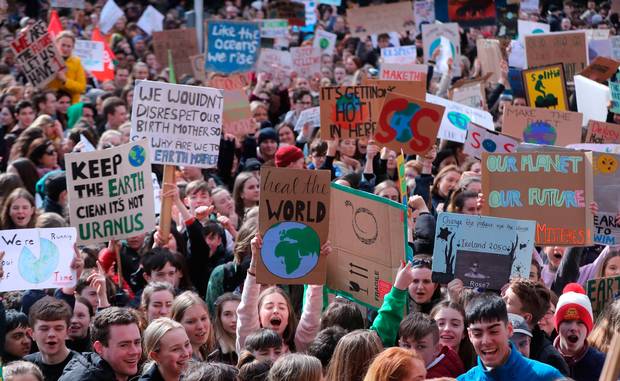 Fórsa is urging its members to support the ‘global climate strike,’ an international protest in support of action on climate change that’s planned for Friday 20th September.

The event, spearheaded by the Irish and international students behind recent school strikes for climate action, will involve demonstrations and other initiatives around the country.

Fórsa wrote to its branches last week to encourage members to join lunchtime demonstrations, in what the organisers expect to be the largest ever worldwide mobilisation for action on the climate crisis.

Fórsa is calling on members to support the global climate strike, and for workers to get behind events in their communities and workplaces.

Fórsa campaign director Joe O’Connor said the union would be updating members about demonstrations taking place near them on the Fórsa website as details emerge. He called on workers to get behind events in their communities and workplaces.

“We are encouraging members, where possible, to join in one of the demonstrations around the country during their lunch break, with most of the events happening at 1pm. We’re also encouraging those who can’t get to a demonstration to organise an action in their workplace. This could be a meeting, a stand, a workplace photo for use on social media or an approach to management,” he said.

Joe added that workers should try to engage with and promote the voices of local school students taking part in the climate protest when organising an action.

Fórsa is encouraging those who can’t get to a climate demonstration to organise an action in their workplace.

Although they use the word ‘strike’ to describe the day of action, the organisers explicitly acknowledge that many workers are not able to take formal strike action for legal or other reasons. This is the situation in Ireland, where the law precludes industrial action unless it relates to a ‘trade dispute’ between an employer and its employees.

Fórsa has responded to the organisers’ call for workers in such circumstances to add their voice to the demand for climate action in other ways.

Contact Joe O’Connor for information or assistance from Fórsa HERE.

Get more information on the Global Climate Strike HERE.

Ryanair pilots to give notice of industrial action