How collective bargaining can benefit staff, employers and the economy 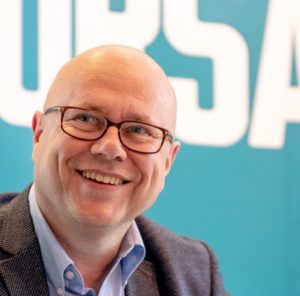 Ireland is one of the EU states trying to water down the collective bargaining elements of the proposed EU Directive on Minimum Wage. It’s an ill-advised move on our part

Ireland is an outlier among longstanding EU nations when it comes to collective bargaining coverage, and new research to be published by Fórsa tomorrow [Monday 31st May] suggests we’re close to non-compliance with international law on the right to be represented by a trade union.

This at a time when long-held positions are shifting on both sides of the Atlantic. “Union guy” Joe Biden’s administration is starting the process of beefing-up collective bargaining rights, and EU Commission president Ursula von der Leyen recently promoted the idea in her State of the European Union address.

Sad to say, the Irish Government remains out of kilter with the new mood. It’s among a group of EU member states seeking to downgrade a European Commission initiative to tackle low pay, income inequality and the gender pay gap by increasing collective bargaining coverage across the continent.

The proposed EU Directive on the Minimum Wage, which has been positively received by co-rapporteurs from the main centre-right and centre-left European Parliamentary blocs, would require Ireland and other EU member states to take action to increase to 70% the number of workers who benefit from collective bargaining.

‘Collective benefit’ better captures the potential value of collective bargaining, the process through which employers and unions negotiate collective agreements on pay, working conditions and other terms of employment.

Coverage in Ireland is currently around 33.5%, placing us second-lowest among the 14 countries in EU membership since before 2004.

In Fórsa, we think ‘collective benefit’ better captures the potential value of collective bargaining, the process through which employers and unions negotiate collective agreements on pay, working conditions and other terms of employment.

That’s because its benefits accrue to both staff and their employers, while underpinning better outcomes for society and the economy as a whole.

For instance, many of Europe’s most competitive economies, including those that score as well or higher than Ireland in the World Bank’s ‘ease of doing business’ rankings, have collective bargaining coverage of 80% or more. They include Denmark, the Netherlands, Belgium, Finland, Austria and Sweden, where robust collective bargaining arrangements are credited with strong consumer demand, economic stability, industrial peace, flexibility and innovation.

OECD countries with integrated and sophisticated collective bargaining systems generally enjoy higher wages across the economy, with lower levels of income inequality. In other words, collective benefit puts a brake on the huge reward disparities and gender pay gaps associated with countries where worker engagement and representation are weak.

This helps businesses large and small by boosting demand, not least because lower and middle-income earners tend to spend more of their wages than they save.

Countries that facilitate trade or sector-wide collective agreements also prevent unscrupulous businesses from unfairly undercutting their competitors on the basis of low pay alone. That’s why Fórsa’s report will urge the Irish Government to harness the productive power of sectoral bargaining to underpin pay and working conditions for all workers in a particular trade, profession or sector, regardless of whether or not they are union members.

The experience of the global pandemic is the latest in a series of developments – including the climate action imperative and OECD, EU and US proposals to clamp down on tax avoidance – that are rapidly reshaping the way the world does business.

Ireland could be at the forefront of efforts to ensure that decent, secure employment, with manageable work-life balance and strong workplace democracy, is central to this inescapable new frontier for global competitiveness.

A high-level working group, established under the Labour Employer Economic Forum (LEEF) – Ireland’s highest-level forum for policy discussions between employers, unions and government – is currently examining how collective bargaining could be developed in ways consistent with competitiveness.

With an interim report due in the summer, the group is also reviewing the adequacy of Ireland’s workplace relations framework and wage-setting mechanisms, as well as legal and constitutional impediments to reform. I believe it could be the vehicle that brings Ireland back into the European fold.

At the very minimum, the LEEF process must bring Ireland in line with its current responsibilities under international law. The right of workers and employers to bargain collectively currently features in the European Social Charter, which has been ratified by the Irish Government. The right to freedom of association is also enshrined in the European Convention on Human Rights.

Over the last decade, a series of legal actions has eroded Ireland’s already-weak collective bargaining and wage-setting infrastructure.

Joint Labour Committees and Employment Regulation Orders, which regulated sectoral employment conditions, have effectively been dismantled, and recent legislative reforms are now before the Supreme Court after being struck down in the lower courts.

The proposed EU Directive deserves strong support from Irish business and Government because it would trump the 2007 ‘Ryanair’ Supreme Court ruling and allow elected Governments to legislate to improve rights to collective benefit.

Prior to that, the 2007 ‘Ryanair’ Supreme Court ruling undermined our legal framework, and has effectively been interpreted as a constitutional block on legislation to strengthen collective bargaining rights.

If for no other reason, the proposed EU Directive deserves strong support from Irish business and Government because it would trump this ruling and allow elected Governments to legislate to improve rights to collective benefit.

Collective benefit means stronger protections and better wages for working women and men. But the research shows that it can also improve productivity, boost demand, enhance innovation, and deliver greater stability for businesses and their staff.

Retaining our outlier status on low pay and collective benefit would instead leave Ireland isolated and more exposed in a rapidly-changing post-Brexit world.

Read the full report HERE and an executive summary is available HERE.

Collective Benefit: Harnessing the power of representation for economic and social progress, by Alan Eustace (Trinity College, Dublin) is published by Fórsa today (Monday 31st May 2021).